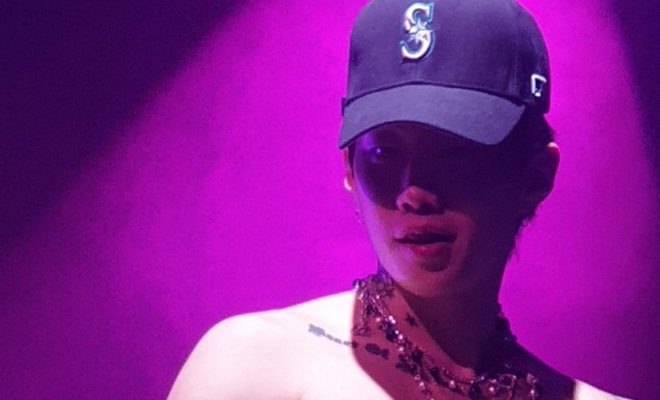 Jay Park lights up Sydney with his Sexy 4EVA show

Jay Park unleashed his Sexy 4EVA World Tour on Sydney on Friday, 10 January 2020 – what a way to start the year!

Jay is no stranger to Australia having headlined his first tour here in 2012 and as part of the line-up for RAP BEAT in 2017. Australian audiences have proven how much they love him by snapping up tickets to the Sydney and Melbourne shows in a matter of minutes.

The adoring crowd in Sydney on Friday night was no different.

Australia may have hosted the final shows in the Sexy 4EVA world tour, but that does not mean that there was any less energy, hype or expectation surrounding this show. Crowds lined up outside the charming and eclectic Enmore Theatre from Friday morning with the size of the crowd growing as the countdown to doors open began.

When doors opened at 6.30pm fans excitedly entered the venue and anticipation for the show to come went into overdrive.

Before Jay Park hit the stage, DJ Wegun appeared on stage and his set got everyone ready for what was to come. It was clear that the audience was ready to party and they were all at the right gig for that!

One of the highlights of the DJ Wegun set was when Woodie Gochild joined him on stage. The energy level in the room escalated a couple of notches for his performance. Woodie was wrapped in the love and enthusiasm of the screaming crowd and it seemed to give him an extra boost, his performance was unexpectedly amazing. We were expecting great, but we got awesome.

With that it was time. The lights dimmed and as the stage lights came up, Jay Park appeared to screams, cheers and roars of approval from the already hyper-hyped crowd.

Jay knows how to put on a show – he raps, he sings, he dances (which is exactly what you would be expecting right?), but he is charming and engaging as well (which you might not have expected from a rap star). He talks to the adoring, screaming fans constantly and is adorably cute despite all the swagger that just rolls off him.

The performance was a mix of old and new tracks – but every single one of them were clearly fan faves. We got to hear: Forget About Tomorrow, On Fire, Aquaman (kinda inappropriate, but my absolute personal favouorite), Solo, Joah, My Last, V, All I Wanna Do, Yacht, Dank On It, SOJU, You Know, Mommae and Sexy 4 Eva (which included an impromptu audience sing-a-long – but then most songs were).

During a break in the performances, Jay took the time to show off the Aussie slang he has learned – most of it highly questionable if you ask us – but it had everyone laughing.

He also told the roaring crowd that this was the second to last show in the Sexy 4EVA world tour. Despite the fact that he did look a little tired, if you didn’t know better you might have expected that this was the first night of the tour – energy levels were high and just kept getting higher.

Jay also shared that he had personally donated $30,000 for bushfire relief, as had AOMG, and of course this only made the audience scream louder.

Then it was back to more music – the dancers were amazing, the set was brilliant and it all added to the fantastic vibe of the night.

Of course, the highlight for many at the show (judging by the ear-splitting screams) was when Jay took off his shirt. He teased and taunted, but when that shirt came off the roof just about came off the Enmore Theatre.

Can we talk about the underwear and various items of clothing that were thrown up on stage. Jay made good use of the Aussie Pride BBQ apron wearing that while performing and swinging a red lace bra around while singing.

He took great care of the audience making sure that those up front were kept well hydrated by leaning down to share his bottled water with grateful fans.

With the show coming to an end, the crowd went into overdrive realising that it would all soon be over. They roared, they screamed, they jumped, they clapped and it was obvious how much everyone in the room had enjoyed themselves.

Time for one last photo with the entire crowd before it was all over and those who were lucky enough headed over to the Jay Park Sexy 4EVA After Party at Space Nightclub hosted by Plus82Culture.

By the time the hyped up crowd entered the after party, everyone already knew that they were in for a BIG night. The music was pounding and the beat was resonating down to our core – we loved it!

With a line-up of spectacular DJ’s ready and waiting to go, it was time for the show to go hard. Spray opened the show and it was a thumping set, he was followed by Pumkin who had everyone on their feet. Then our new favourite DJ of all time, DJ Wegun took to the decks for the first of his two sets. Ymdda lived up to the hype and gave us an amazing set. If you ever get the chance to go to a Jay Park After Party – do yourself a HUGE favour and make sure that you go!

Thanks to kohai, AOMG and ADAPT Production Group for bringing Jay Park to Australia and New Zealand. A special thanks to Plus82Culture for the Jay Park AfterParty at Space Nightclub.

Were you at the Jay Park Sexy 4EVA show at the Enmore Theatre? Did you make it to the AfterParty? What was your favourite part of the show? Let us know your thoughts in the comments below.

Narelle
← Previous Story GOT7 captivates Melbourne Ahgases with their fun, laid-back and confident presence!
Next Story → Jay Park has a blast in the middle of Melbourne’s crowd as he ends ‘The SEXY 4EVA’ World Tour