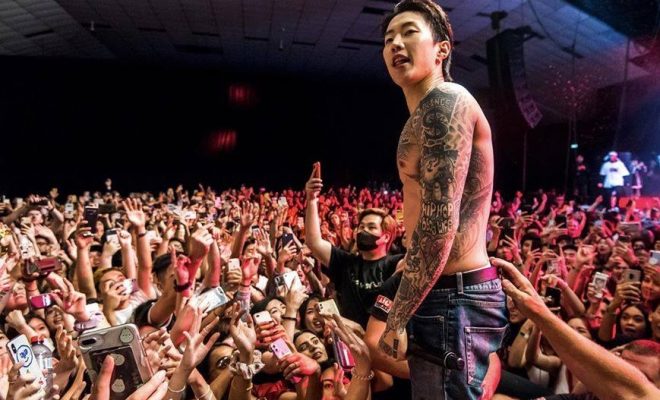 After 8 years, Jay Park has finally stepped back onto Melbourne grounds with more enthusiastic fans awaiting him at the Festival Hall on January 12th. Fans were buzzing with excitement as Jay Park greeted the fans at 6PM before heading into the venue. Once it’s time for admission, fans were racing in to get the best view of the stage. Not long after, cheers erupted as DJ Wegun takes the stage by the DJ set. He plays different songs from AOMG artists like Simon Dominic and Gray that got fans hyped.

Jay Park‘s first guest artist makes his entrance. It is none other than H1GHR Music‘s Woodie Gochild. He definitely lifts the mood with his excitement. He was seen enthusiastically moving around the stage from one side to the other while rapping intensely to his tracks. Woodie also knew how to engage the audience with his presence. He also surprised everyone when he gave away his jewellery to the crowd! It was nice to see him bust up some moves, especially moves that he had shown on ‘Show Me The Money‘.

Woodie Gochild thank the crowd before Jay Park made his grand entrance on the platform with red light shining above him. He’s got the fans cheering as he sang all the songs that the fans knew. He first greeted the fans with his hair all sleek back while pulling off the all-black outfit. He had the fans grooving along to his ‘Solo‘, ‘Joah‘, ‘All I Wanna Do‘, ‘Me Like Yuh‘ and ‘Forget About Tomorrow‘. However, he turned up the heat as he took off his jacket and danced hardcore with his dancers on tracks like ‘V‘, ‘Drive‘, ‘On Fire‘, ‘Aquaman‘, ‘My Last‘, ‘Yacht‘ and ‘Mommae‘.

Let’s not forget about the amount of fan service he gave to every part of the crowd. He sang to every section and moved as close as he could as he pointed to different fans in the crowd while flashing his best smiles. It was nice to see how happy he was while performing on our Melbourne stage. As everyone knew, Jay Park sounded the best when he sang live as he serenades our souls with a mixture of his old and new tracks.

There were also moments in which Jay Park had the change to talk to his fans. He talked about the times he had visited Australia and thanked the fans for waiting for his return, as well as welcoming the new fans. He also mentioned the current Australian bushfire situation and talked about AOMG‘s donations. It was something that touched the fans’ heart as we all know how much it means to us.

To allow Jay Park to have his breather, the final guest artist made his way to the stage. It is none other than Punchnello, who won the latest series of ‘Show Me The Money‘, as well as the latest artist to join AOMG! He gave us a diverse range of tracks that showcased his abilities. He went from smooth rap to rock-rap. It was so interesting to watch what he can do on stage. It was enjoyable to see how excited he was to be on the stage as he too moved and jumped all around the stage.

Then, Jay Park is back with his more intense tracks that allowed him to showcase his rapping style. This includes the performance of ‘Worldwide‘, ‘Finish Line‘, ‘On It‘ and ‘K-Town‘. However, that didn’t stop fans from attempting to rap along with him. He returned to his fun tracks that he had worked on with other artists including ‘Ain’t No Party Like A AOMG Party‘, ‘Iffy‘, ‘Giddy Up‘ and ‘Water‘. We also got a surprise with the appearance of YUMDDA. Jay Park and YUMDDA performed ‘All Day (Flex)‘ that allowed Jay Park to show off his shirtless self.

Since it was the final stop of his World Tour, he called out to all those who were involved in his World Tour production to come up on stage and take a photo with the crowd. It was nice to see a surprise appearance of DJ Pumkin. He performed the final track with the whole crew whole had taken out their own phones to film and remember this moment.

As everyone was having the best time of their lives, Jay Park caught his fans off guard as he hopped off the stage and moved around to greet his fans. Fans were definitely screaming their lungs out as Jay Park manoeuvred through crowds and crowds of fans who were shocked at how close he was to everyone. It was nice to see how much fun he had in the middle of the crowd while watching his crew on stage enjoying their time.

With that, Jay Park ends his ‘SEXY 4EVA’ World Tour in Melbourne with memories that fans will cherish forever. However, it never truly ended as Jay Park hosts a SEXY 4EVA official After Party in Melbourne, featuring BackNForth. The night just started and the DJs knew the right songs to play! The DJs that took to the stage included DJ Son, DJ Pumkin, DJ Wegun, DJ Spray and DJ YUMDDA. Jay Park got the whole crowd wild when he turned up unexpectedly. He sang, he rapped but most of all he enjoyed his time with the fans before his early flight home.

Thank you Jay Park for the wonderful performances you have shown Melbourne. We would like to extend our thanks to Adapt Production Group, kohai, (+82)Culture, BackNForth and AOMG for allowing us the opportunity to cover this event.