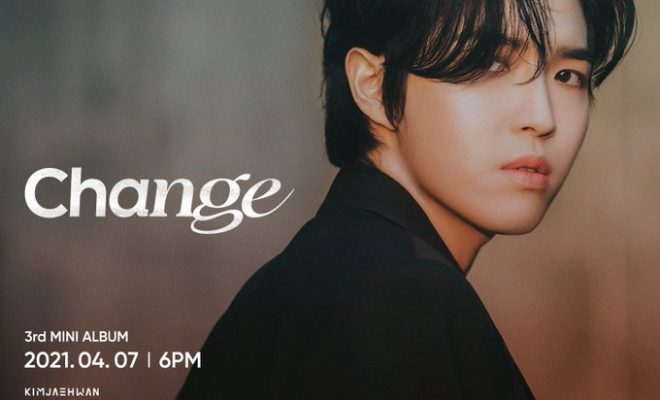 Jaehwan wants to make a ‘Change’ in comeback teasers

Jaehwan will be making his hot return with ‘Change‘. He has revealed the comeback schedule and the teasers. So, check it out below!

From the comeback schedule, he will be releasing his concept teasers from March 23rd to 30th. The tracklist and highlight medley will be revealed on April 2nd and 3rd. The MV teasers are set for April 5th and 6th. Finally, the album cover will be dropped on April 7th.

For his first, second and third concept teasers, he has gone for this blue effect which brings out the liveliness of the outside scenery. This kind of effect also goes well with outdoor areas. In these images, he gives us different expressions. It ranges from serious, fun and sadness. This kind of range goes well with the name of this album as he continues to change up the way he feels in these images.

In his first concept film teaser, we get this beautiful acoustic guitar that goes well with Spring. One can’t help but sway along to it as they bring us this uplifting sound. It goes well with the overall concept of the video as flowers are seen surrounding him. The sun is also out and bright, which enhances the overall beauty of this concept.

He has revealed his next three concept teasers. This is known as his ‘-ing‘ versions which goes a darker change from him. This is definitely different from what we have seen from him before, which leaves us quite excited. In particular, this dark concept actually goes quite nicely with him, especially with the way he is conducting himself in the image. One can’t help but see his maturity through these images.

Meanwhile, he will make his hot return on April 7th. Which concept do you like the most? Let us know in the comments below!