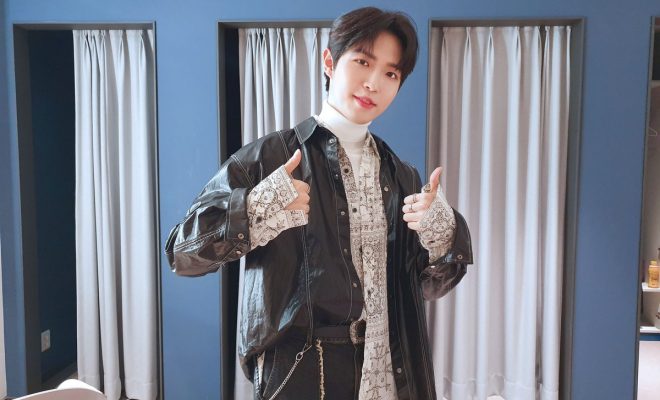 Jaehwan is in the ‘Moment’ in latest concept teaser

Jaehwan has dropped new concept teasers for his upcoming return with ‘Moment‘. Check it out below!

As scheduled, he has released the album covers for ‘Moment’. The ‘Day‘ version has him resting on the rails while staring out into the distance. The ‘Night‘ version gives us a darker concept. The red lighting highlights the outfit he is wearing, enhancing this dark concept.

In his first concept teaser, the ‘Day‘ image has him resting on the couch with a comfy outfit. He looks relaxed for the camera, giving us his best pose. His ‘Night‘ image is rather a sunset image. The lovely view and the way he stands give us the perfect highlight of him. It is such a beautiful image to look at.

His next concept teaser, the ‘Day‘ version is him going for a more sexy vibe in which he is seen wearing quite an open black outfit. The highlight of red in his hair and the orange highlight on his jacket helps make it brighter. His ‘Night‘ image is placed in black and white. It appears to be a sea behind him with the city view right at the back. It is incredible to see such a shot.

He has also revealed the album packaging details. There is a total of two versions. Each version comes with the photobook, the CD, the photocard, a flipbook, a clear bookmark and stamp 3-frame image. For those who purpose the first edition, they will also get an additional film frame and poster.

He has dropped the tracklist. There is a total of six tracks including ‘Need Time‘, ‘After Party‘, ‘NUNA‘, ‘Who Am I‘, ‘Paradise‘ featuring AB6IX‘s Woojin and ‘Zzz‘.

Meanwhile, he will make his return on December 12th. Are you enjoying the teasers? Let us know in the comments below!