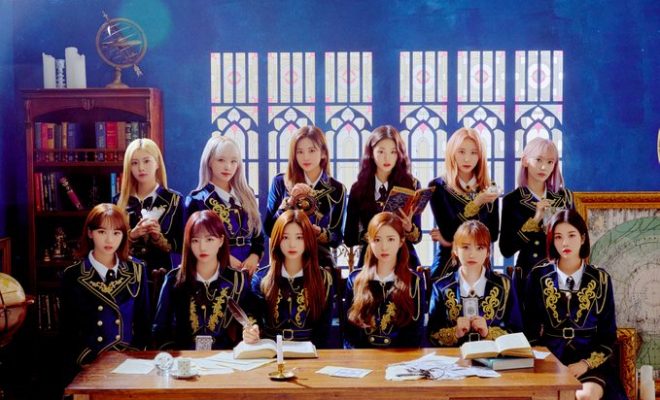 IZ*ONE gets us excited for the release of a new track called ‘D-D-Dance‘. Check out the release schedule below!

From the release schedule, they will drop their main concept teasers from January 18th to 24th. The MV teasers will be revealed on January 21st and 24th. Finally, the track will be released on January 26th. From the schedule, it looks like this release is part of Universe Music.

The first image revealed is their group teaser. In the image, we get this mystic vibe as they appear to be studious students. They are seen wearing quite exquisite outfits while in a library-like setting. It is quite a look on them.

The next image is their dance cover image teaser. This image is what we can expect the album cover to look like. Like their group teaser, they are in the same setting. However, we have gotten a close up shot of the group teaser.

They have begun dropping the member’s teasers. Wonyoung and Yuri is first up with their teasers. We get a close up shot of Wonyoung while we get a far shot of Yuri. The concept continues on from their group teaser. They definitely know how to own the look.

The latest teaser is of member Chaewon and Minju. This time, we get a close up shot of both members. What is interesting about the image is the fact that it is alluding to the horoscope signs. It will be interesting to see how the storyline ties up.

Meanwhile, they will drop the MV on January 28th. Are you enjoying the concept? Let us know in the comments below!