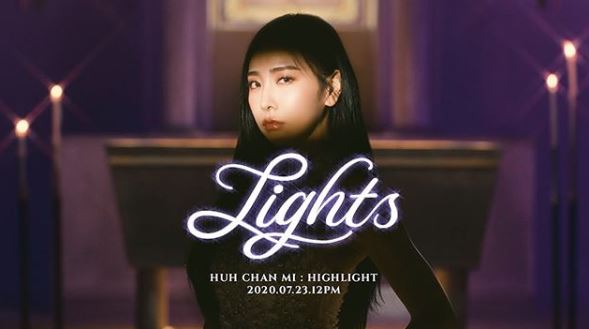 Huh Chanmi has revealed details on her official debut. Check it out below!

In her first image teaser, she reveals that she will drop her first digital single, ‘Lights‘ on July 23rd. In the image itself, she is seen sparkling in blue while giving a lovely pose. It sets the tone of what we can expect from her debut concept.

The next image teaser has her embracing the dark side. The image is taken under darker settings as she glares at the camera. It is definitely a look on her.

She has also revealed a spoiler film. We hear this chime sound as someone is seen reaching for the gem stored in the middle of the room. It ends with her singing the lyrics before it echoes away.

In her D-6 teaser, the image captures her under natural light. She looks great in white with her beauty shining through the image. It is quite a look on her.

The next image teaser allows her to showcase her more sophisticated side. She has her hair tied back while wearing a white blazer. She is also seen looking up, allowing us to admire her side view.

The next image teaser has this lovely effect over her as she is seen wearing a black outfit. She stares down the camera with her big eyes. She looks gorgeous in this outfit with her hair done so beautifully.

In her MV teaser, we get to hear more of the track. It has such a catchy chorus which makes us move. We also get to see more of the gem that was featured in the spoiler film. With how it sounds, one can’t wait to hear the verses that follow this uplifting beat.

Meanwhile, she will make official debut on July 23rd. What do you think of the song so far? Let us know in the comments below!