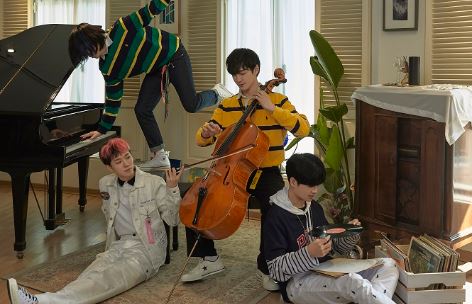 Hoppipolla will be releasing their first mini album called ‘Spring To Spring‘. Check out the teasers below!

This band is made up of four members including I’ll, Hong Jinho, Ha Hyunsang and Kim Youngso. I’ll plays the piano, Jinho plays the cello, Youngso plays the guitar and Hyunsang sings! They have dropped a couple of album covers, showcasing their soft and sweet sides.

They have also dropped the tracklist. There is a total of six tracks including ‘Opfern‘, ‘About Time‘, ‘Marchen‘, ‘That’s It‘, ‘Our Song‘ and ‘Furrow‘.

Meanwhile, they will drop this mini album on April 22nd. Are you excited? Let us know int he comments below!