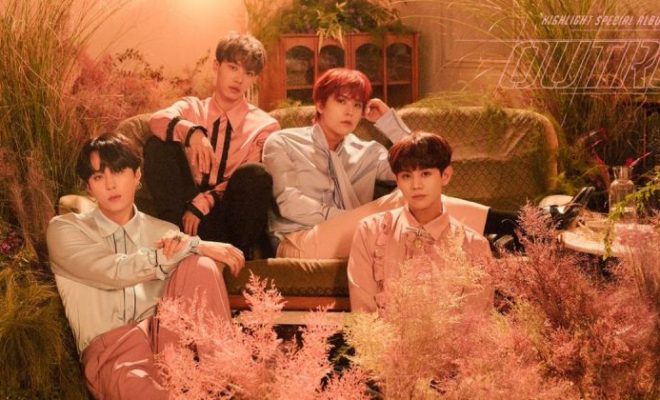 Those of you who have followed me and my articles over the years will no doubt know my feelings about Highlight.

The news of a their special release album ‘Outro‘ brought tears to my eyes, and especially since the album will most likely be the last before they enlist, with the group’s leader Dujun already undertaking his mandatory military service.

‘Outro‘ and the title track ‘Loved‘ is scheduled for release on November 20.  The album will include a total of six tracks including the title track and an instrumental version of the pre-release track ‘Take Care‘.  There are two unit tracks; one features Yang Yoseob and Son Dongwoon, while the second unit is made up of Lee GiKwang and Yong Junhyung.  The final song on the album is a solo track by Yoon Dujun which was recorded prior to his enlistment.

In the past 24hours the group have released two teasers for the title track ‘Loved’.  Both teasers feature a similar evocative, somewhat dark concept, with the clip seemingly set in an abandoned warehouse space that leaves you with a feeling of loneliness and coldness.  We get to hear a snippet of the track that features Yoseob‘s trademark and beautiful vocal.

Highlight‘s special album ‘Outro‘ is scheduled for release on November 20.

What do you think of the sound of ‘Loved‘ the title track from Highlight‘s special album ‘Outro‘.

Written and edited by Narelle (who thinks GiKwang is all that)