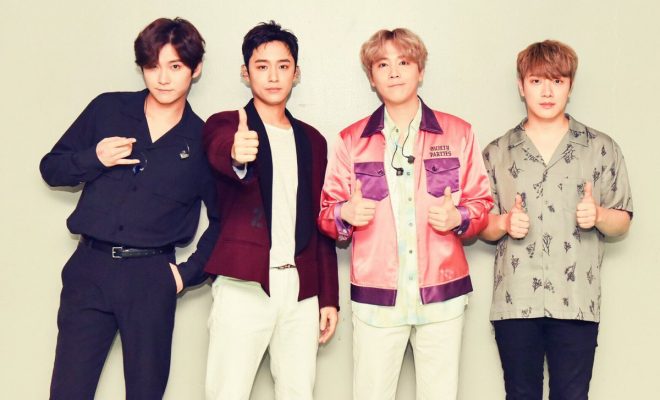 Here are all the FTISLAND updates you need – for this week anyway!

It’s been a whirlwind week in the land of FTISLAND, here’s our catch-up on all the bits that you (and we) missed!

In news to make any FTISLAND fan happy, it looks like the rumours of a Korean group comeback are potentially true.

On August 29, FTISLAND surprised fans with a brief clip from a recording studio. The clip was titled ‘FTISLAND new album spoiler‘, and we get to hear Hongki doing what he does best and singing his heart out in what appears to be a dramatic rock ballad.

Just days before FTISLAND‘s bassist and vocalist, Lee Jaejin released the music video for his Japanese solo debut track ‘Love Like The Films‘. The song is from his debut mini-album ‘scene.27‘ which is scheduled for release on October 9.

The song is bright, fun and cheerful which perfectly matches Jaejin‘s personality. The lyrics are about a special love that you would normally only see in the movies. In Jaejin‘s case the special love is his family, his bandmates and his fans.

And no, you are not seeing things, the clip features FTISLAND‘s label mates N.Flying backing him up. The interactions between them all is the cutest thing ever!

In the final FTISLAND update for the week, we like many other fans are coming to terms with the news that Hongki‘s military enlistment date has now been confirmed.

We wish him well as he undertakes his service.

NB. We know that there was also news about Minari and his family this week, but as per our previously stated position on not covering stories of a personal nature, we will not be covering that news. Even though we wish him and his family all the very best!

What do you think of all of the FTISLAND news this week? Are you looking forward to the comeback album? Let us know your thoughts in the comments below.