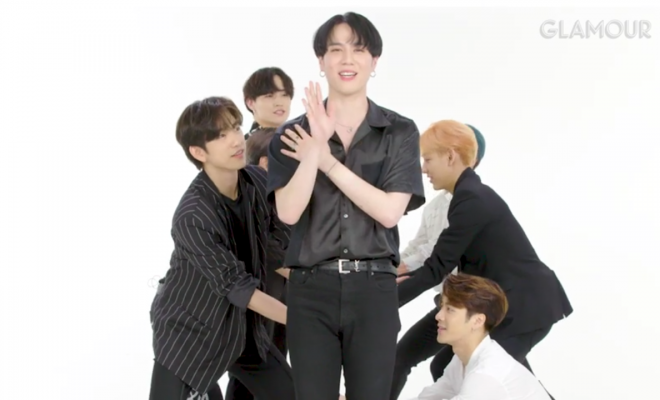 GOT7 take the friendship test & tell you 7 things you didn’t know about them!

GOT7 are coming to Australia and we are so excited to see them soon. They are fast becoming a worldwide phenomenon and now we can feel like we are with them in their new videos.

In the first video, GOT7 thanks to Glamourtake a friendship test. We won’t spoil it for you so watch it here first.

GOT7 Take a friendship test with Glamour

The video begins with the caption “see you next life” which is a sign of how much fun this video is. It then goes on to introduce each member and a small story of their life and how they met each other as well as their impressions of each other.

This is a really humbling moment as it is taking us on their experience with each other which we haven’t seen before. It also shows more of them as a person as opposed to being just an idol and that they have the same emotions as us here. It’s fun just watching them idolize each other like we do for them and also just having fun with each other.

In this video you see them having to give each other compliments. During this the members talked about friendship, their love for another and how they respect each other. Next was they had to hug for one minute and we got lucky because a couple even sung to each other.

My favorite was when they had to mirror each other’s dance moves which included the Fortnite dance, salsa moves and even some spontaneous break dancing inspired moves which I wasn’t expecting. The very last exercise was the trust fall which was a lot of fun as they giggled and had fun with it.

Which was your favorite? Tell us below!

Just when you though we were done, you were wrong. GOT7 in collaboration with MTV did another video of 7 things you didn’t know about GOT7.

7 things you didn’t know about GOT7 with MTV

This video is alot of fun as the members tease each other and have fun with their answers.

To give an overview of the video, Youngjae opens the video talking about how he never takes his rings off and explains one was from his brother and the other he bought. Yugyeom loves to do his dance practice with actual dance shoes or boots (the boys aren’t really sure what to call them but to us they look like canvas shoes). Bam Bam does a hysterical “pickup dance” line with a tag line “I just slid into your DM’s” and we can’t stop laughing. Jinyoung has to close all the doors before he sleeps and we can relate. Mark talks about a bracelet that he hasn’t taken off since Christmas that’s called a “wish bracelet“.

JB tells us that he owns 5 cats and loves them, how adorable! Jackson tells us every morning he makes a chicken breast, broccoli, grape, apple, orange and banana shake. He even shows us how to make it and we are very curious if that would actually taste good. At the end you see bloopers of the members trying Jackson’s drink and based on their reaction its more for health than taste. We might try it here, what about you? Let us know what you would put in your GOT7 shake below.

Don’t forget to get your tickets to their upcoming ‘KEEP SPINNING’ WORLD TOUR 2019′.

Tickets for the two Australian shows are still available and details are below.