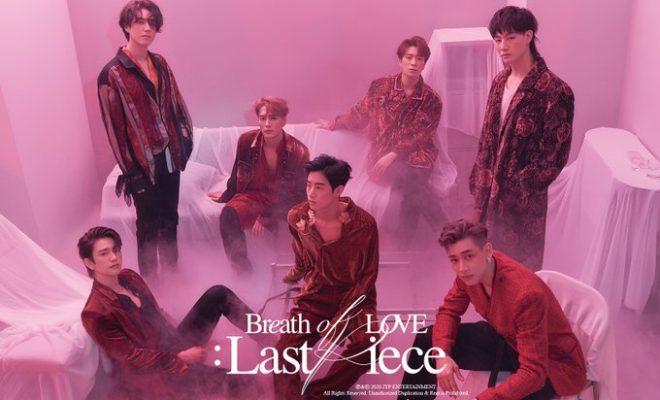 GOT7 is breathtaking in comeback teasers

Yes, that is right! GOT7 will be making their hot return in November. Check out the teasers they have released so far below!

For their first group teaser, we see the members embracing the colour scheme shown in the comeback poster. It has this soft look as they are all dressed up warmly for the coming winter. Fans are definitely also excited to see Jackson with a dyed hair colour as the other members embrace the darker hair colour.

The next image teaser goes for that ocean blue colour scheme as the members are seen posing close or on top of one another. It definitely shows their closeness as a group, as well as their overall beauty.

The last group teaser is definitely eluding with that sexy look. They are seen posing with pink as the main colour scheme. The members are also wearing shades of pink and red which is matched with black as fog is seen surrounding them. It is a sight to see!

They have also released the tracklist. There is a total of 10 tracks including ‘Breath‘, ‘Last Piece‘, ‘Born Ready‘, ‘Special‘, ‘Wave‘, ‘Waiting For You‘, ‘1+1‘, ‘I Mean It‘ and ‘We Are Young‘. From the tracklist, it is clear that every member has participated in writing and composing the tracks. In particular, it is said that ‘Breath‘ is composed by Ars, aka Youngjae, and the title track is composed by Defsoul, aka JB.

The Hyung line, consisting of JB, Mark and Jackson are first up with their individual concept teasers. They are seen going for the concepts we have seen in their group teasers. JB has grown out his hair again, which suits him well. He looks at the diamond with such intensity, leaving us all breathless. Mark definitely shines in every image. This kind of soft yet sexy look fits him well. Finally, Jackson has fans all shook up with his sexy looks, especially the image where he had loosened some of his buttons. It is quite a look that has fans excited for more.

Meanwhile, they will make their hot return on November 30th. Are you excited? Let us know in the comments below!