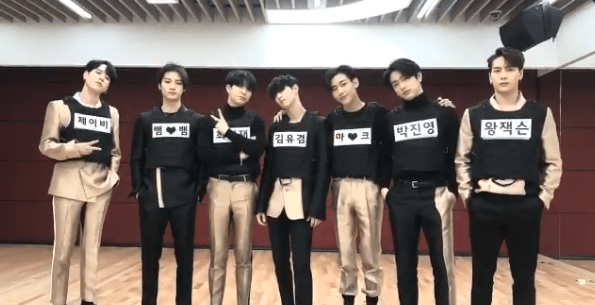 GOT7 enjoys themselves in latest ‘You Calling My Name’ dance practices

GOT7 recently made their hot return with ‘You Calling My Name‘. They know how to spoil fans with different kind of dance practice versions. Check them out below!

They begin with the performance video. This video showcases the full dance choreography under the same settings shown in the music video. With that, it allows us to focus more on the dance while enjoying the beauty of the different settings. It is nice to see them looking amazing in all the outfits they have chosen for this latest comeback.

They have released the first dance practice. This is the original dance practice as they are seen wearing casual outfits while dancing along to the song. It is nice to see the kind of effort they put into perfecting the moves. It is nice to watch how well-coordinated the moves are and how each member’s moves are interconnected. It makes it quite enjoyable.

They have released an interesting version of the dance practice. This is called the Name Tag Survival version. The song plays and when there is a countdown, the members have to rip the name tag they have pasted in front of them. The member who gets the name ripped off will undergo a fun punishment.

The final version is their Part Switch version. This version is where the members choose a name and that becomes that person during the dance choreography. For those who have watched their previous dance practice, Jinyoung was exempt from the part switch, so he was able to do his part. Jackson and Youngjae were also lucky to have chosen their own names. It was a fun video to watch as we see them struggle less in comparison to their previous Part Switch version.

So, be sure to check out the dance practices above. Did you enjoy them? Let us know in the comments below!