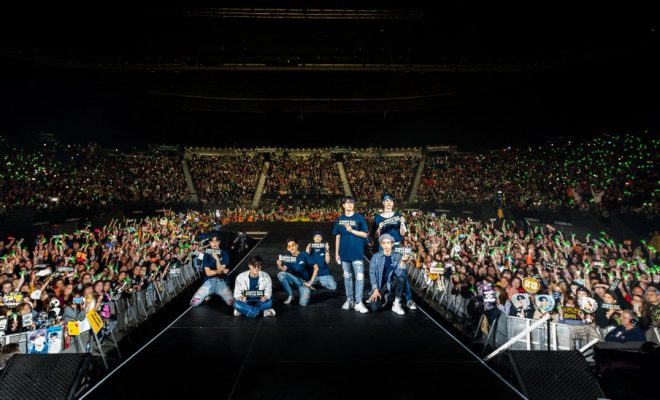 GOT7 captivates Melbourne Ahgases with their fun, laid-back and confident presence!

GOT7 finally returned to Melbourne two years after their Global Fan Meeting in 2017. On the night of August 25th, Melbourne Ahgases were beaming with excitement as everyone united under the glowing green lights from all those light sticks. Despite the cold weather, fans were determined to see GOT7!

As the clock ticked over to 7:30pm, the remix of ‘A‘ blasted through the speakers and it was evident from the increase in screaming that everyone was already hyped for GOT7‘s entrance.

The first VCR played and all the fans were mesmerised by the video. Every close-up shot, every stare from the members and every intense moment was felt through the video. Before we knew it, the different platforms were pulled up to reveal the members that we had all been waiting for!

The show kicked off as they began their ‘Eclipse‘ performance. Every movement and swag they put into the performance was admired by their fans as the screaming continued throughout the song. It didn’t stop there as they powered through ‘OUT‘ and ‘Never Ever‘ with such an energetic vibe. The addition of back-up dancers added a whole new element to the performance. It was amazing to see a remix version of ‘Never Ever‘ where they added an extended dance break, allowing us to fall in love with their sexiness.

The night had only just begun, and the members were already engaging with the crowd. They introduced themselves while saying that they were feeling happy that fans were enjoying the show as much as they were. Shy at times, many of the members did their best to speak in English in order to communicate with their Melbourne fans.

They continued their performance with ‘Skyway‘ before some members mysteriously disappeared off-stage. Before fans had time to wonder what was going on, JB was already back on stage with his solo performance of ‘Ride‘. His sexiness was overflowing not only from the song but from his overall vibe. He knew all the right moves to make to have fans screaming his name. There was also one part where JB pulled down his bandana and roughly bit down on it while dancing quite beautifully. It was a sight to see! (Editor’s Note: Tracey is actually a Jackson stan, not that you’d know it from this comment!)

Unexpectedly, Youngjae appeared right in the middle of the stage as he showed off his beautiful voice. He sang his song, ‘Gravity‘, which is a song that describes you as his gravity. Before we knew it, AmeriThaiKong unit, aka Mark, Bam Bam and Jackson, took their place on the extended stage in red. They brought their Hip-Hop vibe out and partied with the fans. They then performed two tracks. The first ‘God Has Returned‘ was produced and named by Bam Bam. While the second track was called ‘Manyana‘, which meant Tomorrow. It was named by Jackson and it’s meant to mean that tomorrow is going to be a better day, so forget about all the hate.

The final unit performance was between Yugyeom and Jinyoung. Yugyeom began his performance blindfolded before passing it onto Jinyoung. They knew how to move and kept us transfixed on their every move. It was also great to see the cute interactions they had with their back-up dancers during the performance. When that ended, the remix version of ‘Stop Stop It‘ came on. It was definitely one of the highlights of the concert – it was one of the highlights of the concert and was even more intense than the original. During the dance section, they were so cute when bopping their heads to the song, but they still looked quite cool when doing so.

Having performed many tracks already, they slowed it down with their sweet interactions with the fans. What GOT7 and fans shared that day was special and pure. The cute and cheeky interactions were genuine and really put everyone in a good mood. It was also great to see them loosen-up and bring their personality to the stage. It was clear that they were having so much fun on stage. They were true professionals during the show, but managed to make sure that their individual personalities still shone through. There were special moments when members would interact with one another with short laughs, smiles and touches, which were very sweet to watch.

They performed ‘1 Degree‘, ‘Sign‘ and ‘I Am Me‘. The second VCR played and let’s just say it got more intense than the first VCR. This time, it was in black and white and the members were all in a daze. They were seen wandering around in a dark tunnel before they reached an end with a bright light shining. The whole concept of this concert is escaping from the darkness and finding the light, aka finding their Ahgases. This helped determine the songs that they performed.

With that we moved onto the more lighthearted part of the show, they performed ‘Come On‘, ‘Just Right’, ‘Paradise‘ and ‘Look‘. It was during this section that they found time to interact with their fans. They wandered around the stage, giving them a look, a heart and some love before coming back together for the full group performance. It was these moments that fans cherished the most.

They then slowed it down with ‘Thank You‘ and ‘Miracle‘. During their ‘Miracle‘ performance, it was clear that they were trying to make each other laugh even though the performance itself should have been serious. They were all intensely staring at each other while at other times bickering quietly before they started to sing their sections. It was something that would rarely be seen in their music shows and made the whole moment that much more heartwarming. It isn’t GOT7 if there are no moments where they are trying to crack each other up!

They also performed many of their other tracks including ‘Save You‘, ‘Page‘, ‘Lullaby‘ and ‘Hard Carry‘. They even performed the remix version of ‘Teenager‘ that was performed during the 2017 MBC Music Festival. Having watched it during that festival online, seeing it live was unbelievable and totally unexpected! It was even better than the first time they showcased it!

Before we all knew it, GOT7 announced that the show was almost done. They gave their final speeches and comments. Jinyoung started first and talked about how he was able to witness the White Night and enjoyed the coffee here. His English has improved immensely, and he sure sounded like a natural on stage! Yugyeom cutely spoke in English and thanked the fans for coming to their concert. He was glad to be back in Melbourne and he hoped the fans had enjoyed the show.

Youngjae said that he had a lot of fun and talked about how surprised he was about the weather in Melbourne. He asked fans to be careful not to catch a cold. JB continued with his speech, he said that he was glad to be here and was very happy. He thanked the fans for coming and said that they will be back. He said that the group will continue to bring better performances.

Jackson gave us his best “G-Day Mate“. He thanked the fans for coming out today. He said that the group was blessed and honoured to be able to perform in Melbourne. He also talked about heading back to Korea to work on a new album! (Is this a hint that there will be a comeback soon?? Will have to wait and see!). Bam Bam talked about how cold it was but how hot it had gotten throughout the concert. He said that he was glad to be back! He also hilariously explained why he loves to say “Skkkrtt” and “brrrrrr“.

Mark finishes the speeches with his thanks and gratitude. He thanked the fans for the wait and thanked the fans for being their light during the dark times. He hoped that we will continue to fight through together and hoped fans would keep their heads up and forget about the hate!

They disappeared off stage and that caused fans to chant in unison: “Encore” and “GOT7“. Then, a special VCR came on which showed the members playing games to determine who would be cooking. At the end of the game, the oldest, JB and Mark, had to cut up the vegetables and grill up the meat. Yugyeom was generous enough to help out Mark with the grilling! During that time, they all sat down together and reflected on their insecurities and how they felt about this coming World Tour. However, it ended on a high note since they are GOT7!

After the video, GOT7 was eager to be back on stage and performed their final Encore songs before wrapping up the show. It was clear that no one wanted to leave the venue, so they performed a total of five songs. During that time, they invited the back-up dancers back on stage, and they all had fun just dancing around.

After spraying the crowd with water, they clearly used up all the water bottles that the back-up dancers brought out. Yugyeom was drenched with a few bottles and so was Jackson who was splashed by different back-up dancers. It was very nice to see them have fun on stage! They, of course, also got the fans involved by splashing water everywhere they could! For those who are curious, the tracks they had performed included ‘Fly‘, ‘Go Higher‘, ‘Shopping Mall‘, ‘Fish‘ and a repeat of ‘Come On‘!

With that, GOT7 ended their ‘Keep Spinning‘ Australian tour. We would love to thank JYP Entertainment and Live Nation for giving us the opportunity to see them live and bringing them to Australia.