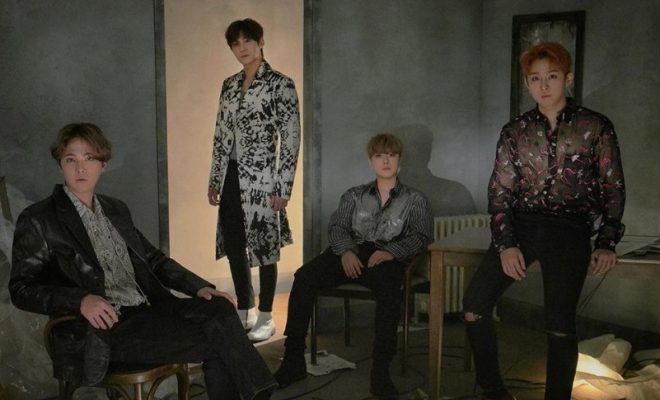 FTISLAND are going all out for ‘Zapping’

It was only earlier this week that the first teaser for an FTISLAND comeback was released. Then BOOM on September 2, FNC Entertainment officially announced the release of a new mini-album ‘Zapping‘ and the title track ‘Quit‘ on September 9.

This will be their first Korean comeback since the release of ‘What If’ twelve months ago. This will be the group’s final release before Lee Hongki enlists for his mandatory military service at the end of September.

In the week since the announcement of the release, there have been many many teasers dropped on us – and given that I’m a huge fan of the group and Hongki in particular – I’m in my happy place!

The latest teaser released is a live vocal clip of Hongki singing the title track ‘Quit‘. Who else already has this song on high rotation on their playlist?

We’ve also had the teaser clip for ‘Quit‘ released. In the clip, we see a couple’s relationship through the months and change of seasons. The song is about leaving a love behind.

The group have also released a highlight medley for the songs that are included on their album.

We get the chance to hear a small part of each of the five songs. They all have that trademark FTISLAND sound and Hongki‘s astounding vocals are as amazing as always.

The two sets of concept teasers that have been released for ‘Zapping‘ show two different sides to the group.

This set which has been labelled the ‘No Signal’ version show a darker, moodier, sexier side to the group.

In this set of individual concept images, the group still seem a little moody, but the shots are full of colour and movement.

FTISLAND has released new teasers for their return!

The band shared the track list for their mini album “Zapping” as well as a live vocal clip of Lee Hong Ki singing their title track “Quit.”

With the release of the track list for ‘Zapping‘, we see that Hongki took took part in composing ‘Hope Again‘ as well as ‘Don’t Lose Yourself‘, which he also participated in writing lyrics for. Lee JaeJin co-composed the track ‘No Regret‘.

With the announcement of the release of their 7th mini-album ‘Zapping‘, the group released two teaser images, which gave us a feel for the opposing concepts that we could expect to see with the album – the darker, moodier vibe opposing to the bright and colourful concept.

FTISLAND will be making their comeback with ‘Zapping‘ and the title track ‘Quit‘ on September 9 at 6pm KST.

What do you think of the teaser images for FTISLAND? What about ‘Quit‘, do you like the sound of the song? Let us know your thoughts in the comments below.

Written and edited by Narelle – who freely admits that she is obsessed with Hongki’s voice!