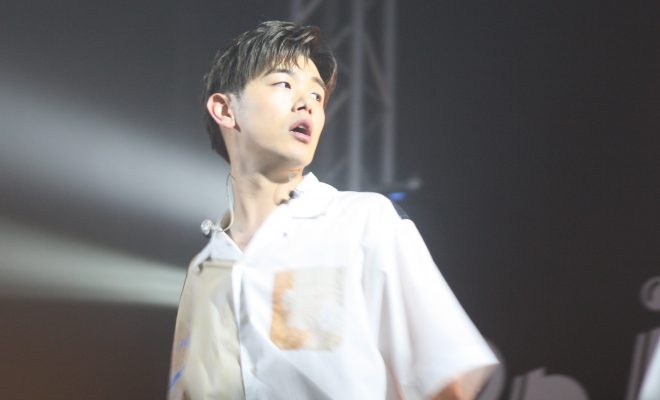 Eric Nam lights up the audience in Brisbane

After hyping us for weeks with Instagram posts, shout-out videos and twitter messages Eric Nam finally hit the stage at The Triffid in Brisbane on Friday night, 8 March 2019.

For those of you who weren’t able to make it, or have yet to see Eric perform live, I can tell you that you are in for a treat! I’m not sure what I was expecting, but he is the complete showman – he is charming, fun, cheeky and connected to his fans.

It goes without saying that Eric’s voice is smooth, warm and engaging, but it was more than that, it was soulful, mellow and rich. As we’ve said in previous articles, he has the ability to mold his voice to suit any style or genre. We got to witness sad love songs, upbeat pop tracks, cover versions (that were arguably better than the original), acapella versions of a multitude of songs and his own impressive tracks.

His interaction with the audience was frequent and cute from the very beginning. He acknowledged that, “it’s been awhile” since he’s been back to Brisbane, but the audience didn’t care and welcomed him back with open arms and a roar of approval.

After kicking things off with some upbeat songs to get the audience in the groove, Eric greeted the fans in the VIP Mezzanine level which also included his underage fans. He told them he wouldn’t forget about them during the show, and he didn’t! He talked to them, reached out to them and engaged with them throughout the show.

He made special mention of the parents in the audience and apologised to them, hoping that they would also enjoy the show.

Then it was time for more music, which had the entire venue singing along in full voice to both Korean and English lyrics without faltering. It seemed like everyone knew all the words (and had been practicing hard).

Eric Nam ‘Into You’

Eric then asked the audience if anyone was celebrating their birthday – and of course, hundreds of hands shot up in the air. After laughingly telling everyone that they ‘can’t lie about this‘, we saw a few hands sheepishly drop back down.

When he actually found someone who said it was their birthday, it turned out that their birthday was yesterday, on Thursday, 7 March. But nonetheless, he led the crowd in a rousing rendition of Happy Birthday. Much to the delight of the birthday girl.

There was more music on the way, including my favourite ‘Float‘. We haven’t mentioned the backup dancers yet, so let’s do that now. They were amazing and kept the audience enthralled with the choreography and their interaction with Eric.

Eric actually jokingly complained about the amount of dancing he had to do in the show – although he managed to keep up without missing a beat. He admitted that ‘body rolls’ are “really hard to do“.

He went on to share a story about his mum. To cheers and shouts of disagreement Eric told that crowd that he was ‘“about as sexy as a block of wood”. However, his mum had previously asked him to “tone down the sexy as God is watching“. The audience erupted into laughter at the story.

He also told us that it was one of his first concerts in an English speaking country for a while, and that he had to take a minute to adjust. Again, the audience yelled their appreciation.

For part of his encore, Eric asked the crowd, “What do you guys want me to sing?“. In response to the suggestions, he then performed a part of a number of songs acapella – which just once again proved what an amazing vocalist he is.

After returning to the stage, Eric and his dancers felt like a beer, so they shared their beers with those lucky enough to be at the front of the stage. told us that he hadn’t had a beer in two days as he was preparing for the show. When he gulped down the beer he said it was ‘so good’. To which the audience roared in approval.

The audience gave him an education in the best of aussie traditions by trying to convince him to ‘do a shoey’. For those of you who aren’t acquainted with this delightful tradition, it is where the drinker removes their shoe, fills the shoe with beer and then downs the contents.

Eric’s reaction to the request was one of bewildered humour. Responding with the comment, “That’s unhygenic“. The audience roared with laughter.

Eric sharing a beer with the audience


There was more music to be enjoyed, and then it was time to end the show. Before leaving the stage, Eric thanked the audience and promised he’d be back again. Don’t be away so long this time Eric!

This was not a concert where you could stand still and observe. Eric’s music is infectious as is his personality. The entire show was the perfect mixture of music, chat, playfulness, amazing dancing and beautiful vocals.

Eric Nam is set to perform in Sydney tonight Sunday, 10 March at the Metro Theatre, and then in Melbourne on Monday, 11 March at 170 Russell.

There are still tickets available for both shows. Tickets are $85.00 (GA) and $175.00 (VIP) (excl booking fees). Go to www.livenation.com.au or www.ericnam.com for tickets.

To stay up to date with this tour, stay tuned to All Access Asia and Live Nation.

Were you at Eric Nam‘s show in Brisbane on Friday night? If you were, let us know what your favourite moment was? If you’re going to the Sydney or Melbourne shows, what song are you most excited to hear live? Let us know in the comments below.

All Access Asia attended the show with thanks to Live Nation and Eric Nam.

NB. All pics are copywright to All Access Asia and may not be used without permission.