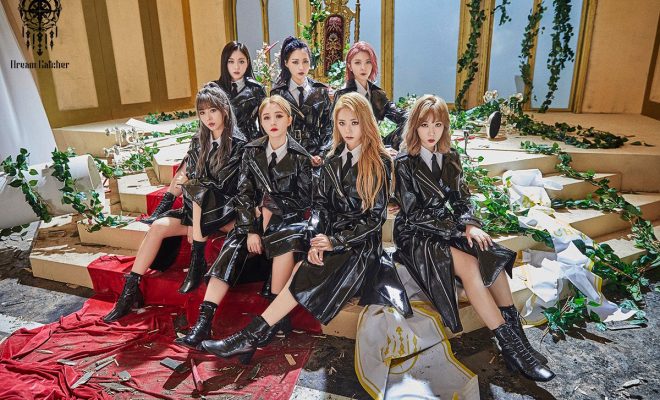 Dreamcatcher has dropped their second set of teasers, as well as their video teasers. So, check it out below!

The members are looking sleek and beautiful in their coloured or black and white teasers. They all appear to be wearing a lovely black leather jacket, which goes well with their sleek look. In the background, it features that throne that was in their previous concept teaser. It is also quite interesting that some members are in black and white while the other is in colour. Would it have any significance to the overall storyline they will have for the MV?

They have dropped a ‘Deja Vu‘ trailer in which features an eerie vibe. It features the members wearing what appears to be funeral outfits. It ends with a fight between a knight and a princess. It twists and turns, leaving fans more intrigued than ever!

They have also revealed the lyrics for their title track. However, no actual melody is heard, which allows fans to come up with their own.

Finally, they have dropped the highlight medley for this album. It begins with their intro track that is full of angst. It is intense and is a total Dreamcatcher vibe. Then, we get to hear more of ‘Deja Vu‘. It is so soothing to listen to and it slowly builds up, allowing their voices to flow so easily with the melody. It gets to the chorus and one would be banging their head to the beat.

‘The Curse Of The Spider‘ is just as intense as the other songs. It is just a beauty to listen. It also looks like this song is describing the spider that has been appearing in many of their MVs. ‘Silent Night‘ is another soothing song that has such a party beat. It is the kind of song that one would get lost in. It is classy and full of life. Finally, ‘Polaris‘ is one of their softest songs that allows them to showcase the beauty of their voices. It is one of the most beautiful songs to listen to.

Meanwhile, the group is set to make their hot return on September 18th. Which track caught your attention? Let us know int he comments below!