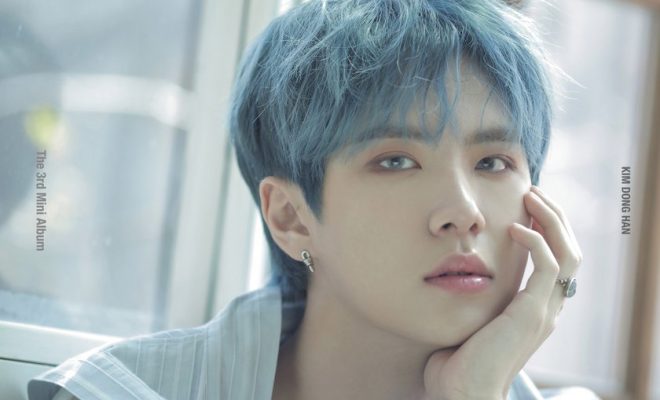 Yes, that is right! Donghan is ready to make his comeback! He has revealed the comeback schedule, that gives you a look into what he has prepared for you over the next week or so. So, check it out below!

From the comeback schedule, he will release his first concept teasers on April 24th. He will also have the pre-ordering start on April 24th. Following on is his tracklist and the first teaser revealed on April 25th and 26th. Next will be the highlight medley and the second teaser, which will be released on April 29th and 30th. He will also be having a talk show about the album on VLive, set for April 30th.

As promised, he has revealed his concept teasers. In this post, he has revealed four image teasers. The first two images has a more soft tone to the image, especially with the dark effect added to the image. The use of blue also gives it that sense of coldness to it. The other images are much more vibrant. It goes well with his facial expressions; giving off that fierce and strong look. The final image ends with a tired-looking Donghan who continues to look good for the camera. The red background brings out his light outfit and dark hair.

Meanwhile, he will be returning with this third mini album, ‘D-Hours Am 7:03‘ on May 1st. Are you ready for this? Let us know in the comments below!

Tracey Luu
← Previous Story NewKidd gives you a look at their upcoming track, ‘Tu Eres’
Next Story → NC.A gives you more detail on her upcoming return in May