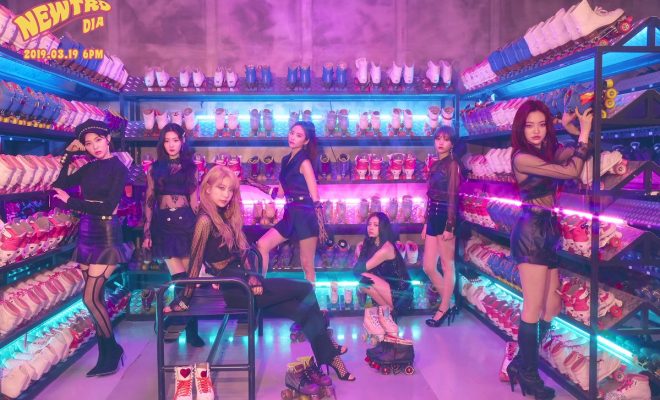 DIA has begun teasing for their upcoming return with ‘Newtro‘. They have not only given us an insight into their concept but also a preview of the kind of sounds they will be returning with. So, check it out below!

What can be witnessed through their concept teasers is the party vibe they are going for. With their album’s title, we can see that they are mixing together the modern/new style with the retro look. Thus, the new look includes their outfits and the neon lights that brighten up the image. What makes the overall look so retro is the scene they are posing at. It appears that they are at a roller-blade rink with all kinds of old machines surrounding them. It definitely has one curious as to the kind of music to go with this theme.

What backs up this theme so well is their concept video. We get to hear the instrumental sound that is just so upbeat. You can’t help but bop your head to it while feeling the uniqueness of the melody. It surely has that dancing vibe to it that also embraces what we typically hear in the past!

They also went ahead and revealed the individual video teasers. First up is Chaeyeon. Through this video, we get to see her charms shine through. She surely has a smile that lights up the room. The track that accompanies the video is the same as the one we heard in the concept video. However, the way she is seen holding the balloons helps enhance that school party vibe which fits well with the song.

The other member who have revealed the video teaser is Somyi. She has this look in her eyes that surely captures you. The wink at the end is surely a cherry on top and is a great finish to the video.

Meanwhile, the group is set to make their hot return on March 19th. Are you ready? Let us know in the comments below!