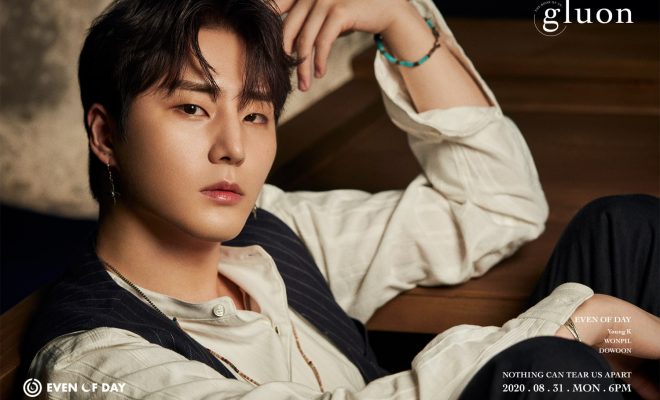 DAY6 Even of Day unit teasers are charming

As revealed previously, DAY6‘s first unit ‘Even of Day‘ will soon be making their debut. The unit consisting of Young K, Wonpil and Dowoon will be releasing their first mini-album soon.

The mini-album to be called ‘The Book of Us: Gluon‘ will be released at 6pm KST on 31 August

Young K‘s individual teaser images for the unit have been released and they have a romantic and olde-world charm to them. The imagery from the voice instruction clip is repeated in the shots.

We’ve also seen a voice instruction clip for ‘The Book of Us: Gluon‘. The soothing and beautiful imagery is accompanied by a narration that ends with ‘Nothing can tear us apart‘.

DAY6 Even of Day ‘Voice Instruction’

Earlier an animated trailer film had been released. The narration that accompanies the clip says; “This universe where we live is made up of so many connected hearts. There’s a very mysterious power that exists between these hearts. This power keeps us strongly connected. Like glue! No matter how far apart we are, this mysterious power is always keeping us connected. With a very strong power!”

DAY6 Even of Day trailer

The track list for ‘The Book of Us: Gluon‘ revealed that there will be seven songs in total including the title track ‘Until the Place Where the Waves Stop‘. The title track was co-composed by Young K and Wonpil with lyrics written by Young K.

DAY6 Even of Day teasers

The DAY6 unit Even of Day will be making their debut with ‘The Book of Us: Gluon‘ on August 31 at 6pm KST.

What do you think of the teasers from DAY6 ‘Even of Day‘? Are you looking forward to hearing their music? Let us know your thoughts in the comments below.