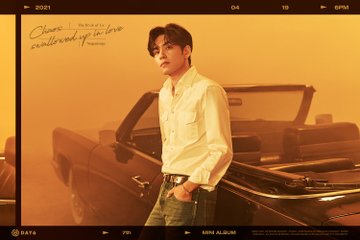 DAY6 enjoys the sunset in ‘The Book Of Us: Negentropy’ teasers

DAY6 has begun dropping their individual teasers for their upcoming comeback with ‘The Book Of Us: Negentropy‘. Check it out below!

Ahead of their individual teaser, they have revealed the tracklist. From the tracklist, there is a total of seven tracks including ‘Everyday We Fight‘, ‘You Make ME‘, ‘Healer‘, ‘Not Two But One‘, ‘Above The Cloud‘, ‘One‘ and ‘Let’s Love More‘.

So far, they have revealed Dowoon, Wonpil and YoungK‘s individual teaser. We get a total of three image teasers each. The three images have this sunset vibe with a yellow effect added to the image. It gives it that old photo feeling, which goes well with the nostalgic vibe. They are seen resting on top of a car, looking quite charismatic. They have also revealed their concept film teaser. In the concept film teaser, it features them by the beach with a lovely lighting effect added to enhance the sunlight at the beach. We also get to see the members sit and drive the car. It also has this overall blue effect that gives a different vibe in comparison to the yellow effect.

Meanwhile, they will make their hot return on April 19th. Are you enjoying the teasers? Let us know in the comments below!