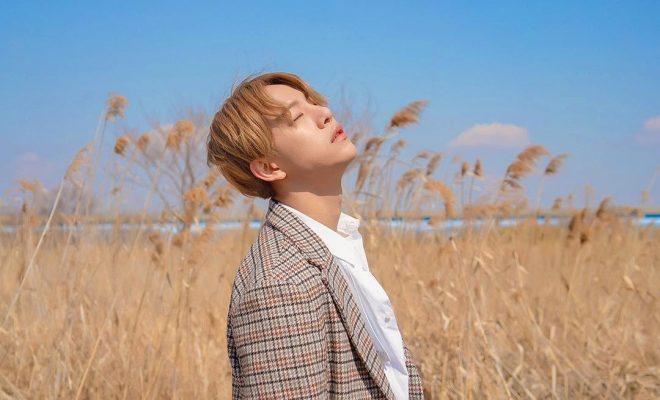 Daehyun pulls you in with ‘You’re My’ MV teaser

Daehyun continues to prepare for his upcoming release of his 1st mini album, ‘Chapter 2 – 27‘. He has revealed a new image teaser, as well as the MV teaser for his track, ‘You’re My‘. So, check it out below!

In this solo return, he has begun to drop more teasers to get you excited. The image teaser has him embracing what nature is present. The lovely dry grass in the background contrasts nicely with the blue sky. He definitely looks amazing in this image as he closes his eyes and enjoy the breeze. From this image, we definitely get that ballad vibe.

He has also revealed the MV teaser for ‘You’re My‘. Through this teaser, it looks like he is moving somewhere as he looks around the room. It is quite simple and fans believe that that’s the main beauty of this video. It sounds great so far, giving fans something to look forward to when it is revealed.

He has also released the highlight medley for this album. This album has a total of five tracks including ‘Happy Dreams‘, ‘You’re My‘, ‘Empty‘ and ‘When You Call‘.

Meanwhile, he will drop his first mini album on April 5th. What do you think of the song so far? Let us know in the comments below!

Tracey Luu
← Previous Story Code Kunst says it’s ‘Too Late’ for a teaser!
Next Story → Red Velvet gives you all the details you need to know about their upcoming Japanese return