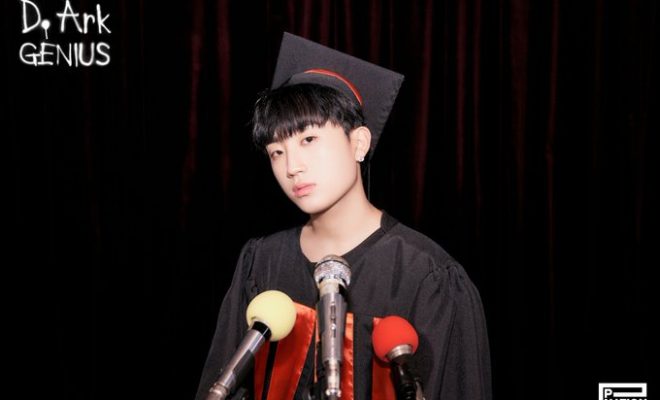 D.Ark to make his comeback this month

D.Ark is ready to make his return with his first EP called ‘Genius‘. Check out the teasers below!

This will be his first release under P Nation. From the first video teaser, it features this fun piano melody which fits in well with his graduation photo. He is just so cute posing for his image teaser.

For his first concept teaser, we get this party vibe look as D.Ark enjoys his time with Changmo. The two have met each other during his participation in ‘High School Rapper 4‘. It is also revealed that Changmo will be featured on his upcoming track, ‘Genius‘.

His official first teaser features him looking like a teacher while writing complicated stuff on the whiteboard. It is filled with writing that would leave on overwhelmed due to the amount of content on that whiteboard. It also connects well with his first concept teaser where the word “quiz” is seen above him and the word “Genius“. We can’t wait to see more teasers.

His third image teaser is much more chill. He is seen wearing quite a causal outfit while chilling on the tennis court. There are a lot of colour balls scattered on the court, which helps enhance this overall vibe that he is going for.

In his audio teaser, we hear a section of his rap verse. He is such a good rapper and despite no beat, he is able to showcase a clean flow and a funky melody.

He has also revealed his tracklist. There is a total of five tracks including ‘Genius‘ featuring Changmo, ‘Bad Kid‘ featuring Swings, ‘Trap Goding‘, ‘Feel My Feel’ featuring Trade L and Noh Yoonha and ‘Scum‘ featuring Moon.

From his third concept teaser, he continues to give us that swag and chill vibe that fits well with him. In particular, he is dressed up quite sporty and looks like he is about to play basketball. It is quite a cool look on him.

His latest image teaser features him wearing that graduation gown with red/orange lining. It contrasts nicely with the black gown. He looks like he is all grown up while wearing it.

He has also revealed the album preview. ‘Genius‘ is such a groovy and catchy song to listen to. One can’t help but get hooked on the hook of this song. ‘Bad Kid‘ has such a fun and soothing melody that is quite addictive to listen to. ‘Trap Godding‘ is that kind of song that showcases his chill side. He surely does a good job showcasing his rap style. ‘Feel My Feel‘ is another chill song that has you drawn to the way it sounds. Finally, ‘Scum‘ is such a soothing song that showcases the beauty of a collaboration. Moon’s vocals are so beautiful and contrasts nicely with D.Ark‘s rap verse. From this EP, it showcases every side of his music. So, we can’t wait to hear the full releases.

Meanwhile, he will make his hot return on May 13th. Which track caught your attention? Let us know in the comments below!