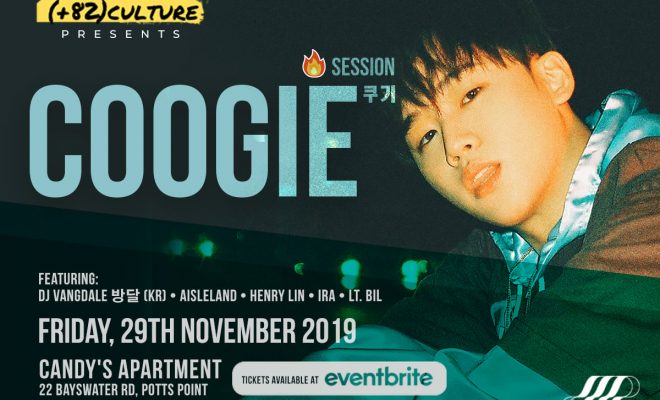 Coogie is heading down to Australia in just a few days!

We’re so excited, Coogie is heading down under to headline his first Australian show in just a few days.

With thanks to our friends at (+82)culture and Million Market, Coogie 쿠기 will be appearing in Sydney on November 29 at Candy’s Apartment.

The supporting line-up is spectacular and is full of talented performers that are going to make your night memorable.

Coogie’s shout out to Australian fans

In a special treat, not only will you get to see Coogie 쿠기 live, but (+82)culture has lined up a lit supporting crew for the show. Check them out below:

Sydney Korean crew “aisleland” was formed at the start of 2019. The group banded together through each member’s initial creative rapport with each other, and has ever since grown together with their overlapping visions and music styles. Each individual offers a diverse range of talents— from cinematography to producing, creating projects that are rooted in hip hop and contemporary R&B, with a bit of Korean flair.

Did you know DJ Vangdale is one half of producing duo GIRLNEXXTDOOR?!

Have you heard this producer tag before?! You’ll probably recognise this from Sik-K’s latest album FL1P which DJ Vangdale produced for the banger ADDICT. Also, he produced Coogie X Sik-K latest EP S.O.S (Sink or Swim) which you can hear live at our event! We’re happy to announce that DJ Vangdale will be doing an exclusive DJ set before Coogie’s set so lets show him how us Aussies party it up here!

I’m Henry Lin, a rapper and producer from Sydney. If I had to describe my music in one word, it would be ‘melancholic’, with my songs falling largely into lofi hip hop on one hand, and cloud trap on the other. Though I listen to a variety of genres, I draw a lot of my influence from Joji, Peep, and X.

Music has always been in the peripheral, but became more focal in the last year or so. There was a moment, standing in the crowd of Rich Brian at Enmore, when I realised that this music thing right here, this is what I want to do with my life. Over the years, I’ve released music slowly but consistently, coming up on Soundcloud and YouTube (/henrylinmusic), performing at Manning Bar and various university venues. Opening for Coogie is an absolute honour. I want to thank (+82)CULTURE for giving us up-and-coming Sydney artists this opportunity to show our love for the culture, defying language and borders into the art form as it exists
today.

One of the finest Korean-Australian rapper from Sydney, iRA KWAi presents a new voice on the scene you cannot miss out on. Proudly representing his cultural identity, his lyrics flow in both Korean and English with an underlying pride of his creative, passionate & go-getter persona. Embrace the unleashing of his autonomous ego and uncontrollable energy, through the showcase of his extraordinary talent and passion for music

Born and raised in the western suburbs of Sydney, Australia but with sights for something bigger, Nabil became engrossed in the music scene from a young age. His older brother introduced him to rap and from the first listen he’s since been fascinated with the mechanics of lyricism. He started focusing on writing during his late teens, beginning with a form of poetry, scribbling words on paper with no beat to be heard.

His stories stem from his personal experiences growing up as a child of migrant parents in a predominantly white city. He draws on his culture, sprinkling references throughout tracks that tap into a collective experience for many others who grew up the same. All of these influences are distilled into a clear, distinct – and personal – sound to sit with the new artists coming out of Australia.

Tickets for the show are on sale now and are now very limited, head here to make sure you don’t miss out!

Are you going to head to see Coogie 쿠기 when he visits Sydney later this week? Let us know your thoughts in the comments below.