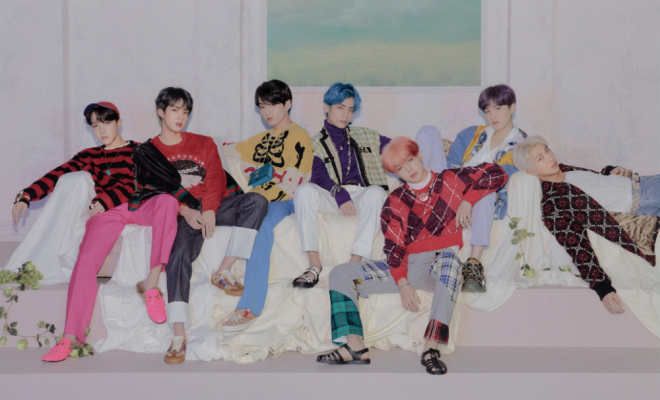 BTS’ comeback with ‘Map Of The Soul: Persona’ is closer than you think

We are now on final countdown to the release of BTS‘ comeback album ‘Map of the Soul: Persona‘.

The album and title track ‘Boy With Luv‘ feat Halsey is scheduled for release on April 12.

Speaking of the title track, we’ve got lots of details to catch you up on – so here we go!

Firstly, the group released the official track listing for ‘Map of the Soul: Persona‘ overnight. The album will contain a total of seven songs. They are: ‘Intro: Persona’, ‘Boy With Luv’ feat. Halsey, ‘Mikrokosmos’, ‘Make It Right’, ‘HOME’ ‘Jamais Vu’, and ‘Dionysus’.

Check out the BTS track listing for ‘Map of the Soul: Persona’

Next up, was the teaser MV for the title track ‘Boy with Luv‘ which features our favourite BTS fangirl Halsey.

The surprising clip features Halsey operating a ticket booth at a theatre where the marquee reads ‘Persona‘. After closing up and leaving for the day, she comes across the members of BTS lounging in front of the theatre under the marquee. The clip then jumps to BTS performing beneath a neon sign that reads ‘Love‘.

The name of the title track ‘Boy with Luv‘ appears to be a throwback to the group’s 2014 hit ‘Boy In Luv‘.

Earlier BTS had released more concept images, this batch of shots stayed with the overall theme that we have seen of laid back casualness, but again had two different concepts.

Each set of shots had one group photo and sets of individual shots. Concept shots 3 had the members posed in a bedroom like setting dressed in pyjamas (or they could have just looked like pjs to us). While in concept shots version 4, they’re dressed in bright coloured clothes eating fruit.

What did you think of the newest teaser images from BTS? What about the teaser clip for ‘Boy with Luv‘? Are you excited for a new BTS album? Let us know your thoughts in the comments below.