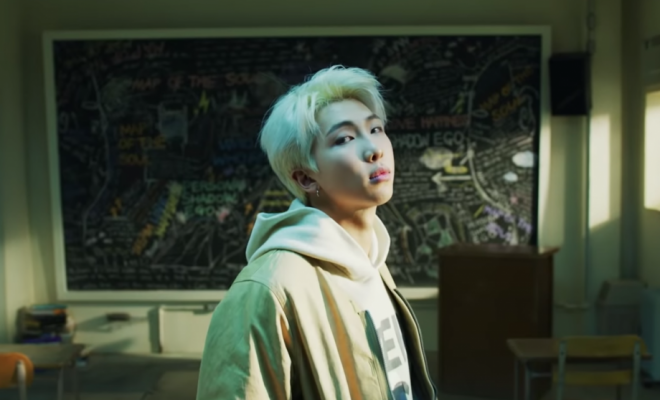 In the BTS tradition of releasing comeback trailers featuring an individual member, we have now seen ‘Persona‘. ‘Persona’ is the comeback trailer for ‘Map of the Soul: Persona‘ their upcoming album and it features RM.

We actually have taken some time to write this review up, because we weren’t able to function initially after watching ‘Persona‘. We’ve been waiting and waiting for RM‘s turn at a comeback trailer and it has been worth the wait.

RM‘s rap delivery of the 3-minute track is perfection (like we’d expect anything else!). He’s spitting fire in a powerful and dynamic track that no-one else could have delivered.

The song sample their 2014 track ‘Intro: Skool Luv Affair’ and in a further nod to that release the intro features the same animated visuals. The song has thrown Army back into detective mode and they have delved and researched and come up with all sorts of interesting theories about the song and the clip.

Part of the clip features leader RM rapping in front of a blackboard with words related to psychologist Carl Jung’s theory about the human psyche, including persona, ego, and shadow

The song, and we assume, the album is inspired by Carl Jung’s theories of psychology, in which ‘persona’ is an archetype of the human mind that deals with who and how we present ourselves to the world. Part of the clip sees RM rapping in front of a blackboard with word’s relating to Jung’s theories.

What did you think of the BTS comeback trailer ‘Persona‘ from RM? Do you have any theories about the hidden messages in the clip? Are you excited for a new BTS album? Let us know your thoughts in the comments below.