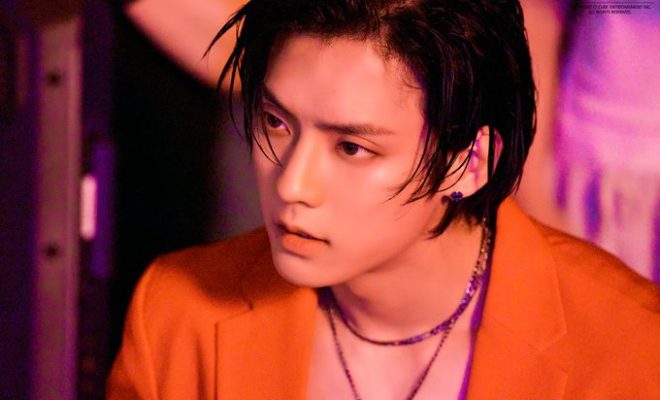 BTOB‘s Minhyuk continues to release teasers for his upcoming return with ‘Boom‘. So, check it out below!

In his concept trailer, we hear this eerie sound that gets louder before it disappears and we hear the sound of burning. There is many fast cut transitions to fit the vibe of the music. It looks like we may be getting a dark concept from him.

He has dropped the audio snippet that gives us a preview of the tracks in this album. ‘I’m Rare‘ hits hard where we get to hear him rap along of this dark melody. ‘BOOM‘ continues with the dark sound as the beats hit hard while he rides the beat like no other. He has such a clean flow that pulls you in immediately. ‘Shadow‘ maintains a deep sound, allowing us enjoy how deep his voice can go. It is interesting how he is able to change it up immediately by bringing in his soothing vocals.

The fourth track has such a smooth melody that allows us to appreciate his vocals more. The fifth song slows it down with the piano melody being the main element in this sound. It has such a sweet melody that puts us all in a good mood. The sixth song is also quite beautiful to listen to, bringing us a more of a ballad melody. The seventh song is a mixture of darkness and smoothness that we have witnessed throughout the tracks in this album. It is a great way to tie the two genres together.

‘Real Game’ has such a hype beat that has us all bopping our heads along to. The ninth track has a slow melody that has this summer element to it. It is a song that we can relax to. ‘Red Wine‘ is the song that has such a fun groove that suits his tone of voice. It is also able to showcase both his rap and vocals. The next track is just as beautiful as the other tracks in this album, as we can all appreciate how great of a voice he has. The final song is also quite smooth, with a minimalistic melody. This allows us to focus fully on his tone of voice.

In his silhouette teaser, it only features a camera zooming closer to Minhyuk but it never reveals his face. It is only an outline of him before the video comes to an end.

In his first MV teaser, it has that intense beat that continues to build until we get a drop before the video ends. This kind of vibe goes nicely with the concept he has shown in the video. He really knows how to look powerful when he makes the final punch to the camera.

In his latest video teaser, we get to hear the instrumentation of the track. We also get to witness the powerful dance choreography to fit the vibe of this song.

Meanwhile, he is set to make his hot return on June 27th. Are you ready for his upcoming solo return? Let us know in the comments below!