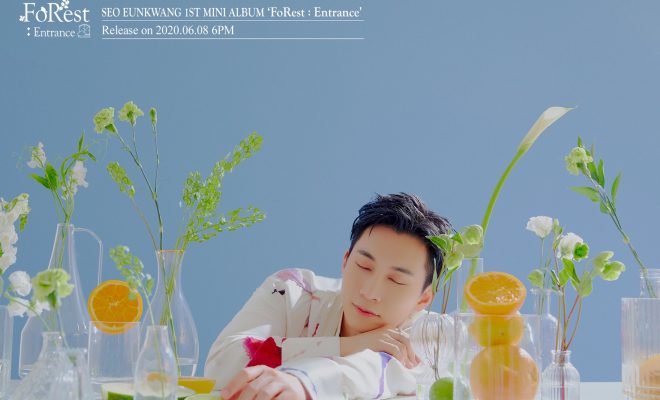 BTOB’s Eunkwang draws you into his ‘FoRest: Entrance’ teasers

BTOB‘s Eunkwang will be making his official solo return with ‘FoRest: Entrance‘. This will be his first mini album. Check out the comeback schedule, as well as the teasers below!

From the comeback schedule, he will be releasing the tracklist on May 29th. Following on is three concept teasers set from June 1st to the 3rd. The audio snippet will be revealed on June 4th. The MV teasers finish up the teasers from June 5th to the 8th.

This album will have a total of seven tracks including ‘Drawer‘, ‘No One Knows‘, ‘Have A Nice Day‘, ‘Walk‘, ‘Four Seasons‘, ‘Love Again‘ and ‘Blue Bird‘.

His first concept teaser definitely embraces the natural look. He is seen enjoying his time out in the field during a great summer day. The skies are clear and thus makes the images look quite wholesome and calming.

The second concept teaser is also another calming image. However, this time, he is seen floating on top of clouds while looking quite adorable. This outfit definitely makes him look youthful and cute!

The third concept teaser allows him to look like a painter. The colour palette definitely captures your attention as it goes so well with this concept he is going for. He looks amazing while relaxing in the set. It definitely heightens fans’ excitement!

He has also dropped the audio snippet. It gives us a preview of the kind of songs he will be releasing. This album appears to contain a whole mix of songs. There are many songs that gives us that ballad vibe, which goes well with his tone of voice. He has such a beautiful voice that really pulls you on our heartstrings.

Meanwhile, he will make his official return on June 8th. Are you excited? Let us know in the comments below!