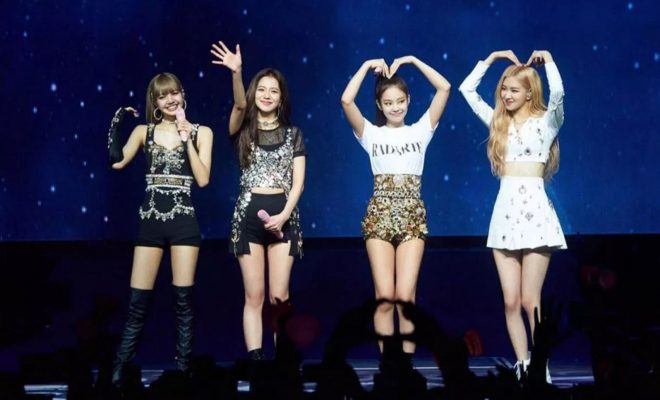 BLACKPINK want to stay ‘In Your Area’ with their Sydney finale!

Saturday, 15 June is a day that will go down in history for Australian BLINKS. It was the day that K-pop queens BLACKPINK concluded their ‘In Your Area‘ world tour in Sydney!

Hype was building early, music swelled and excitement was in the air as fans made the walk from Olympic Park station to Qudos Bank Arena for BLACKPINK‘s long-anticipated Sydney debut.

The enthusiasm could even be felt outside the arena, as the BLINK stage was in full motion with DJs, a photobooth and even official BLACKPINK KIA cars on display!

Hundreds of fans gathered from as early as midday to attend the girls’ concert, and we here at All Access Asia were excited to be a part of it!

You could feel the excitement reaching fever pitch as the afternoon drew to a close and the venue opening time drew closer. Dance competitions were in full-swing thanks to the Blink stage, and light sticks were being switched on as darkness neared. Groups of Blinks were dancing, singing along to the music, and discussing the fandom with others, it was a beautiful sight.

Everyone gathered quickly as the doors to the arena opened. You could hear the last of the sound check as you entered – this made the night even more special.

As we piled into our seats and Blinks in the GA section stood waiting, fans could be heard chanting BLACKPINK songs as the official MVs played on large LED screens. It was a breathtaking moment as everyone sang in unison, only building hype up for the performance even more.

Just when you thought it couldn’t get more epic, it did! The lights dimmed and the stage filled with ominous pink smoke. Fans gasped as the opening to the iconic track ‘DDU-DU DDU-DU’ began and BLACKPINK rose from the ground. Truly an entrance befitting these superstars.

The girls were on-point as they transitioned from the catchy dance track, straight into their hit ‘Forever Young’ – and boy, did we feel their strong energy. From the moment they appeared, the members did not disappoint, impressing us with their sharp dance moves and their flawless vocals.

After concluding their first two songs with perfection, the stunning and talented members – Rose, Jennie, Lisa and Jisoo each greeted the crowd with personal introductions. Rose especially was excited to be back in the country where she grew up.

The queens exclaimed how wonderful it was to be in Sydney, that it was a special night indeed, and how they hoped to make good memories with the crowd. We can tell you – it was definitely a special night and amazing memories were made with BLACKPINK!

We were then swept away by BLACKPINK wanting us to ‘Stay’ with them in the moment, as they delivered their hit song and ‘Whistle’d at us. Once again, BLACKPINK amazed the crowd with their flawless energy and their love for their Blinks.

Next, there was a brief intermission which featured videos from Blinks all over the world dancing, singing and doing fan art of the girls. It was an absolutely incredible tribute to Blinks and demonstrates how much love BLACKPINK has for their fans around the globe.

Fans cheered as the stage dimmed and Rose’s silhouette appeared on the top of a piano. Her voice boomed with emotion as she began to belt out her solo cover of ‘Coming Home’ by Skyler Grey. This cover was made even more special by the fact that Rose is originally from Australia.

Rose amazed us with her amazing medley of songs, transitioning seamlessly into covers of ‘Let It Be,’ ‘You & I,’ and finally ‘Only Look at Me.’

Next, Lisa took the stage with a banging dance performance! Lisa started off slow, with a passionate performance to ‘Take Me’ by MISO. Soon, she was joined by powerful backup dancers as they took on energetic dance track ‘Swalla’ by Jason Derulo.

The next performance featured the gorgeous Jisoo. She lit up the stage with a powerful rendition of ‘Clarity’ by ZEDD. Smoke and confetti filled the arena as Jisoo serenaded the crowd and showed Blinks exactly why she is the groups lead vocalist.

Of course, member Jennie was the last to perform her ‘Solo’. Jennie’s addictive track ‘Solo’ is loved and adored by fans, and this was obvious as the crowd made sure to sing along with the talented member.

It was an absolutely mesmerising moment as we were treated to such an incredible performance from each member that fittingly ended with ‘Solo’ before moving onto a solo by BLACKPINK’s supporting band.

Could this night get any better you ask? Yes, yes it can! In fact, the next songs included the iconic ‘Kill This Love’ and ‘Don’t Know What To Do’.

The crowd chanted, sung and danced with BLACKPINK, which they thanked us for in their next little intermission. We will never forget Lisa trying her best at an Australian accent thanks to Jennie.

We won’t lie, the chemistry between the girls on stage was electric and they’re just like a little family. We’re sure that if the girls ever fight they easily ‘Kiss and Make Up’ just like in their next song, a collaboration originally between them and singer Dua Lipa.

Soon it was ‘Really’ time to say ‘See U Later’ as we were shown the official premiere of the BLACKPINK Kia advertisement, tying in the Blink stage we saw earlier in the day. Amazingly, the crowd even chanted “Kia!” as it came on (seriously, could this crowd be anymore awesome!?)

We knew we were ‘Playing With Fire’ and the girls wanted to ‘Kick It’ as the night continued on with their magical presence.

Before the final songs, the members begged fans to put their phones away, stop filming and stand up and dance. It was obvious that the girls wanted to celebrate an amazing night with the full attention of their fans (and if we didn’t comply, Jisoo threatened that she would be “very serious and make us”.

We were then treated to their catchy hit songs ‘BOOMBAYAH’ and ‘As If It’s Your Last’ which was a perfect way to end the concert… or was it?

“We love you,” “BLACKPINK,” chanted the audience, and to our surprise, the girls were back for an encore.

Us Blinks were treated to an amazing remixed encore of ‘DDU-DU DDU-DU’ and an acoustic version of ‘Stay’. The girls shared an inside joke that they wanted to stay and even sat down and refused to leave because they didn’t want the night to be over.

Even as the concert drew to a close, the members kept fan interaction strong – encouraging the crowd to participate in a Mexican wave, and even stopping the show briefly to make sure those standing were OK.

The members laughed, joked and cried along with us, and shared so much love throughout the night that you could tell that they truly adore what they do.

In their final words before they left they promised fans to keep doing better, teased some new music (spoiler alert?!), and mentioned that they will come back to see us soon.

If this show was anything to go by, we can’t wait to have them back again.

So if BLACKPINK is ever ‘In Your Area’ we highly recommend you see them.

Have you managed to attend any of their shows around the world? What was your favourite part? Tell us below!

asiaadmin
Next Story → The songs that captured me from SOMI’s first album: ‘XOXO’