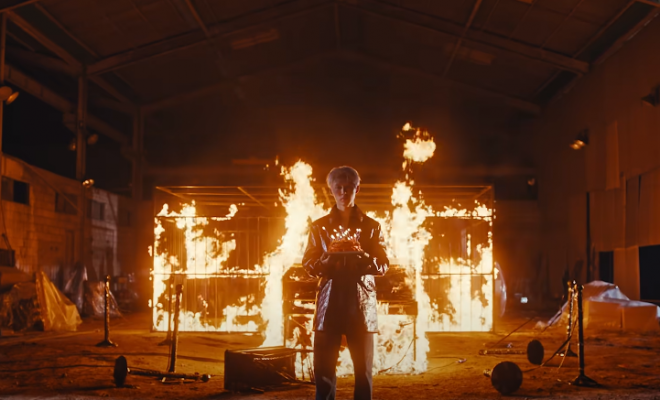 B.I gets ready for the release of his half album, ‘Cosmos‘. Check out the teasers below!

From the comeback schedule, he will release his tracklist on October 25th. The posters will be revealed from October 26th to November 10th. In between, he will drop the message film teasers on October 29th and November 5th.

The tracklist reveals that this album will have a total of seven tracks including ‘Alive‘, ‘Nineteen‘, ‘Cosmos‘, ‘Nerd‘ featuring Colde, ‘Lover‘, ‘Flame‘ and ‘Buddy Buddy‘.

From his first message poster, we get a powerful image and message. The message says “keep the fire alive“. To fit with this message, we see a whole cage lit on fire, which gives the image the light it needs. He is seen wearing a dark leather jacket, which contrasts nicely with the fire in the background. He looks amazing with blonde hair, as it fits well with this concept he is going for.

The next message poster says “alive“. This may be hinting on what we can expect from his track, ‘Alive‘. The image itself still contains the fire, but this time, it is much less. This image goes for a more cinematic look as we see him looking off to the side. The white lighting behind him helps enhance this look that he is going for.

The third message poster says “represent youth” with the hashtag #flame. This may be hinting on the concept that he is going for. It also looks like it links up to his upcoming track, ‘Flame‘. The image features him with half of his face covered. It doesn’t reveal much. But, it surely has us excited!

In his first concept film teaser, we see him going on an intense drive in a tunnel before he crashes. To fit the vibe of the video, we also get a song that starts off calm before it too goes through an intense section. Then, we get his rap verse that we all could jam along to. He showcases what kind of artist he is. He surely has us falling deep into his charms as he spits fire on this track.

Meanwhile, he will make his hot return on November 11th. Are you ready for this? Let us know in the comments below!

Tracey Luu
← Previous Story SAAY gets you excited with her coming soon teasers
Next Story → JYPn has announced their official group name!