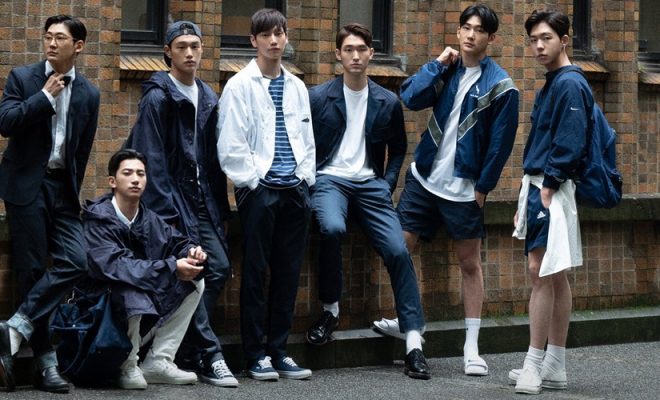 Yes, that is right! It looks like AXIS is preparing to launch a crew called Ambition Ambition Crew, also known as AA Crew. They have revealed information about the group, as well as having the members drop their own solo song. So, check it all out below!

It is revealed that this is a project that will launch a boy group that is diverse and can tackle any kind of entertainment areas. So far, they have revealed seven members including Angelo, Junegyo, Aiden, Elan, Hans, Logan and Daol. Each of them have their own concept, individual charms and ambitions in different areas including singing, dancing, acting, producing and DJing. As a side note, some of you may find Angelo to be quite familiar. The reason being is due to the fact that he was on the survival show, ‘Mix & Match‘ under the name Jinhyeong! It definitely is great to see him here!

What is also quite mysterious, is the fact that each member has a number associated with them. So, Angelo is number 10/100. This may be alluding to the fact that this crew will have up to 100 members. It is said that his ambition is to express through inherence while searching for the gifted and stylish ones.

Junegyo is number 7. His ambition is being a good role model, while searching for inner and outer beauty.

Aiden is number 32. His ambition is to never stop dreaming. He is continuously searching for self-loving, responsible and truthful ones.

Elan is number 11. He wants to enjoy life through music empathy while searching for the magnetic and reflective ones.

Hans is number 21. He wants to spread social positivity. He is someone who is empathic, passionate and curious.

Logan is number 84. He gets his inspiration through soundscape. He has great talents with a great soul.

The final member so far to be revealed is Daol. He is number 12 and is someone who wants to give and care. He is also searching for anyone to learn form.

From what we know, Ambition Ambition Crew is not a boy group. Rather, it is a collection of people who have come together to tackle their own ambitions. Through this crew, they are able to explore what they want to do under the help of AXIS and one another. The group isn’t necessary going to release songs together. However, AXIS is still in thoughts about whether they will be debuting a group or individuals. At this point, they will be working around this project group to bring out the best outcome.

So, ELAN is first to make his debut. He has released two singles that will be featured on his first album, ‘Be Edition‘. This album will be a story that will map out the process in which he begun to truly embrace the meaning behind his name.

The first single is called ‘Feeling‘ featuring Jaxon Kurt. Just an audio MV, we get to focus on the beauty of his voice, as well as the lyrics. This simple melody is so tropical. However, due to his simplicity, you can’t help but truly sit back and enjoy the way his voice enters our ears. His voice is so soothing to listen, allowing you to easily jam to the song. The lyrics itself is also quite touching to listen to. You can see that he had poured his heart into the lyrics and the song.

The other single is called ‘Golden‘ which features member Logan. This track is much more softer and slow. Nevertheless, it is just as soothing as ‘Feeling‘. It is quite magical to listen to, especially when the beats drop. It is a great addition to the song. It is clear that he has such an amazing voice. However, what is a stand out from his songs is the lyrics. Especially since it is in English, you can see how incredible the lyrics are.

Logan too had made his debut with the songs, ‘Black‘ and ‘Know You Better‘ featuring NiiHWA. This song begins with him leading the melody as the beats slowly enter the song. It is slow than other songs. However, because of that, you are able to settle to the mood of the song and truly appreciate the beauty of the song. Then, the chorus comes in and this synth sounds enters right into your soul. It is unexpected yet brings out the best in ‘Black’. It is beautiful to listen to, bringing chills down your spine.

Even though ‘Know You Better‘ doesn’t get a music video, the song is already a stand out without it. You fall deep into the melody of the song, as well as the undertone beat. It is quite interesting to listen to all the kind of songs that swept across the speakers. It is quite mystic to listen to and it is clear that his voice just fits nicely with this kind of mood.

Meanwhile, from what we have seen before, it is clear that Ambition Ambition Crew is ready to conquer the world with their ambitions. They are clearly a talented group and we can’t wait to see what else they will show us!

Tracey Luu
← Previous Story Hashtag is ready to get down with their ‘Freesm’ comeback!
Next Story → MONSTA X’s I.M has returned with a new mixtape featuring ELHAE