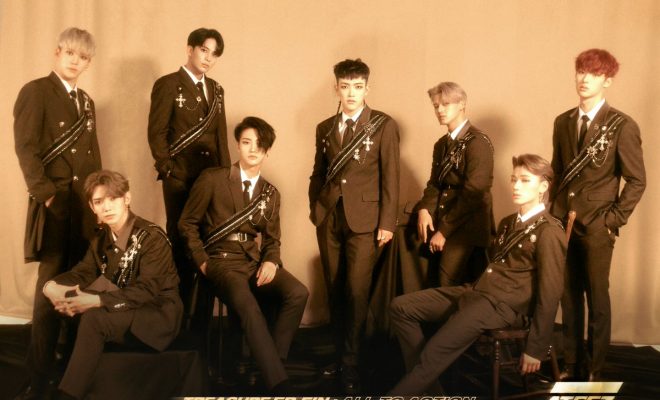 Yes, that is right! Having dropped coming soon teasers, ATEEZ has finally revealed more details on this upcoming comeback. Check out the details below!

From this post, it looks like ATEEZ will be releasing the final section of their ‘Treasure‘ tetralogy. This album is called ‘Treasure EP. FIN: All To Action‘. Like their previous teaser, we get to see the members wearing the same shimmer masks. However, this time, they are looking straight on, giving us a perfect view of each member.

They have also revealed the comeback schedule. They will be releasing their concept teasers on September 24th. Following on is their solo teasers set from September 25th to the 26th. The tracklist and mysterious teasers will be revealed from September 29th to October 4th. There will also be an album preview revealed on October 5th. They will finish the teasers with the MV teaser set for October 6th and 7th.

As scheduled, they have released their first group teaser. The members take off their veils and now seen going for that charismatic look. The formation and style allow them to stand out and look royal. Their outfits are on point and one can’t wait for another hard-hitting comeback.

Ahead of their return, they have dropped the album packaging details. This album comes in two versions. Each album comes with a booklet, a CD, stickers, a post card set, two random photo card, a treasure card, a poster and a polaroid.

Finally, the group is set to make their hot return on October 8th. Are you ready? Let us know in the comments below!