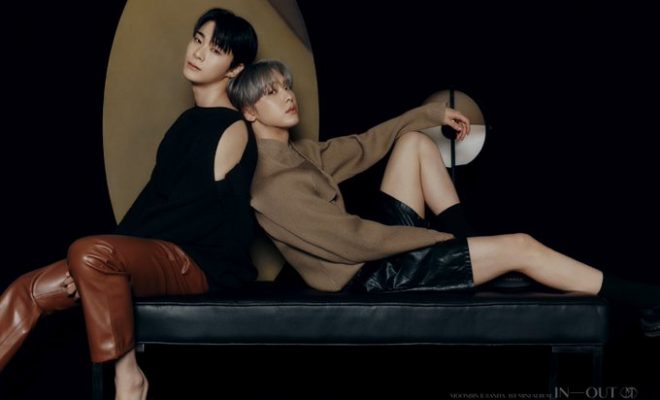 ASTRO‘s Moonbin & Sanha prepares for their upcoming subunit debut. They have dropped the debut schedule, as well as their teasers. So, check it out below!

This album will have a total of five tracks including ‘Eyez On U‘, ‘Bad Idea‘, ‘Alone‘, ‘All I Wanna Do‘ and ‘Dream Catcher‘.

For their ‘Fade Out‘ teaser, we see them posing in black and white. This look they are going for is definitely quite sexy. They know how to seduce the fans with their poses and the outfits they are wearing.

The second part of their ‘Fade Out‘ teaser is coloured. However, they maintain this charismatic look. The colour scheme itself continues to be dark with subtle light colours. They know how to look great in their images as they stare off into the distance.

The third section of their ‘Fade Out‘ teaser embraces the colour black. They are seen sitting on a white mattress, which contrasts well with the background and their outfits. This kind of concept definitely turns up the heat, as it is rare to see them go for this kind of concept. Fans are definitely swooning over this beautiful concept.

Their latest part of their ‘Fade Out‘ teaser is their individual teasers. This black outfit definitely showcases their dark side. We get both a close-up shot and a body shot of them on the bed. One can’t help but fall deep into their charms.

Meanwhile, they will make their hot subunit debut with ‘In-Out‘ on September 14th. Are you enjoying the concept teasers? Let us know in the comments below!

Tracey Luu
← Previous Story A.C.E is your ‘Favorite Boys’ in MV teasers
Next Story → DAY6 Even Of Day goes to ‘Where The Sea Sleeps’