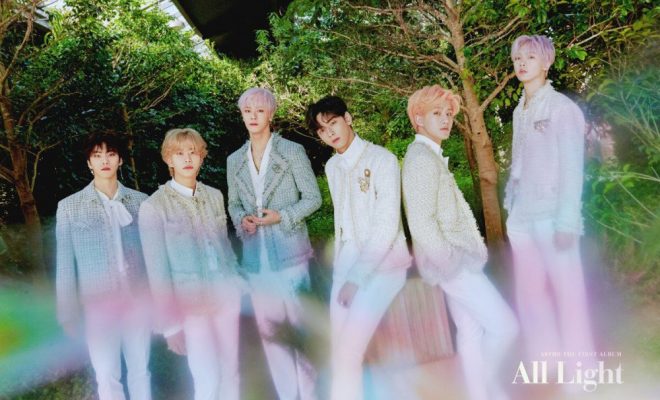 ASTRO assure us it’s going to be ‘All Light’

Just days ago ASTRO announced their comeback with their first full album to be titled ‘All Light‘. Since the announcement (detailed below), the group have been dropping some seriously beautiful teaser images – and we admit it – we can’t get enough of them!

The latest set of teaser images to be released are the ‘White’ version. Again, they are highly visual and shot with a soft focus and feature the members in shades of white.

The first set of teaser images that were released were the ‘green’ images. They feature the members shot in soft focus dressed mostly in shades of pink with glitter and flowers.

The shots radiate a calming and serene vibe that flows out from the pictures.

The group have also released a comeback schedule for ‘All Light‘.

One thing is for sure, we’ve got plenty of teasers, concept films and highlight medley’s to look forward to in the coming days.

Just a few days ago, ASTRO unveiled the first details of their comeback on social media.

Through a moving teaser, it was revealed that the Fantagio group would be making their comeback on January 16. The teaser included the text “It’s gonna be all light.”

Are you looking forward to ASTRO‘s comeback? Which is your favourite set of teaser images so far? Let us know your thoughts in the comments below.