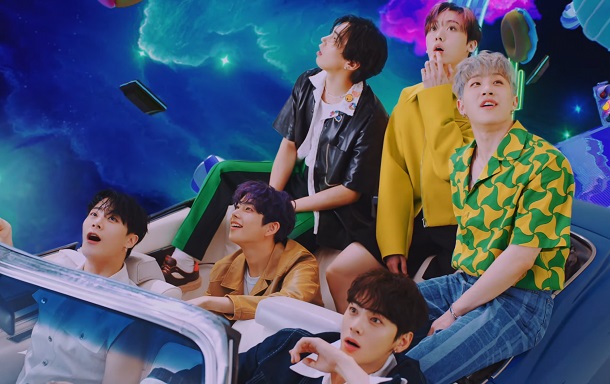 Just days ago we saw the release of ASTRO’s third full album, ‘Drive to the Starry Road‘, and the title track ‘Candy Sugar Pop‘.

We’ve always been fans of ASTRO, and we love that they’re able to experiment with different styles and sounds, but we must admit that we’ve missed the pure pop fun that only they can deliver. This song takes us back to their early releases, even without MJ’s presence (he recently enlisted for his mandatory military service), the song is still a vocal masterpiece.

With a song title like ‘Candy Sugar Pop‘ you wouldn’t be expecting anything but a colourful, charming, ebullient song. The track is the perfect example of what a great pop song should be. The melody is big and bright, with an equally brash synth underpinning it and the bouncing percussion. The song has a hook that will become an instant ear-worm to anyone who listens to it, but having said all that, the song isn’t overpowering or sickly sweet (pun intended). The warm and welcoming vocals meld seamlessly into the rap portions of the song, which give the song the punch it needs.

In the accompanying MV, the group travel through strange worlds, including one with a neon-lit desert and another filled with pink clouds. Each member is seen enjoying a bright red lollipop, which appears to take them to different universes. It’s bright, colourful and bubbly just like the song itself.

What do you think of ASTRO‘s latest release ‘Drive to the Starry Road‘ and the track ‘Candy Sugar Pop‘? Do you like this style of song from them? What are your thoughts on the MV? Let us know your thoughts in the comments below.