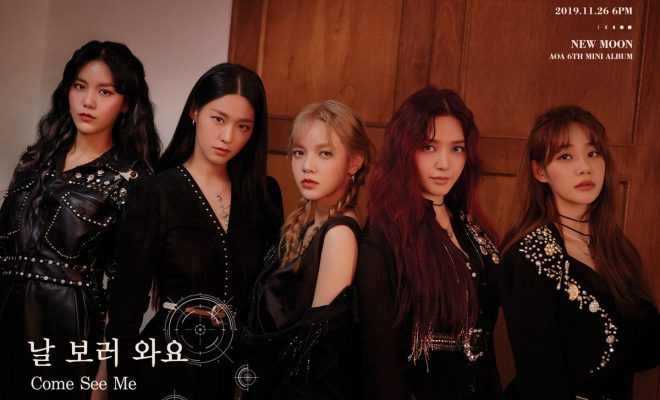 AOA stares at the ‘New Moon’ in latest teasers

AOA is finally making their hot return! They have released lots of teasers for this return. So, check it out below!

The first teaser features what we can expect from the group. They will be releasing their 6th mini album, ‘New Moon‘ with the title track, ‘Come See Me‘. AOA have released two concept teasers where they are going fierce and powerful. They know how to capture us with their beauty.

They have also released the comeback schedule. They will drop their jacket poster on November 15th, the prequel story card on November 16th and the teaser videos from November 17th to the 21st. Following on is their highlight medley and MV teaser set for November 22nd and the 25th.

The first jacket poster is in black and white and has the members grouped up. They look fierce and bold in black as they give us their great stares. These images are just so beautiful to look at.

Next up are the prequel cards. It appears that the words on the images may be lyrics to the song or are hints to what we can expect. The images itself also gives us clues to the concept they will be returning with. It is different and it is surely what makes fans more excited than ever.

Like mentioned, they will be releasing each member’s teasers. The video teasers give us that eerie but fun vibe that one would definitely groove along to. It definitely goes well with each of them and has surely gotten our attention! Each member also gets a total of two images. One of them feature the black outfit they have been wearing and the other has that cowboy-like vibe to it. Nevertheless, both images are able to give us this alluring vibe which has us captured.

They have also dropped the tracklist. This album will have a total of five tracks including the title track, ‘Come See Me‘, ‘Sorry‘, ‘Magic Spell‘, ‘Ninety Nine‘ and ‘My Way‘.

They have also revealed the highlight medley. The title track is actually quite upbeat and really puts you in the mood to dance. ‘Sorry‘ has that classic sound that really has you in a good mood. ‘Magic Spell‘ is another bop to listen to and has you moving to its vibe. ‘Ninety Nine‘ has such a groovy sound. ‘My Way‘ is a simple song that brings out the best in their voice. Overall, they will be releasing an album full of bops.

Meanwhile, AOA will make their hot return on November 26th. Are you excited? Let us know in the comments below!