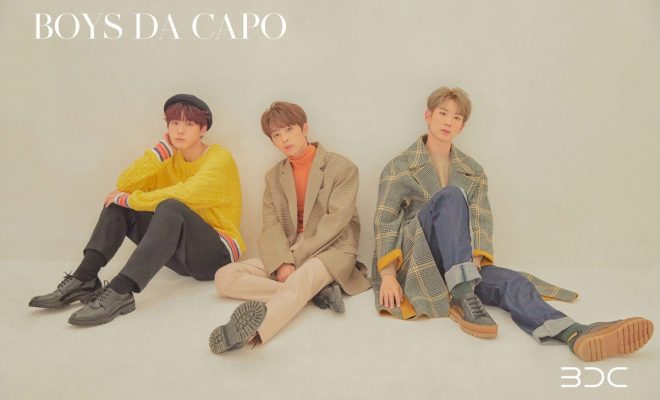 Another Brand New Music project group is coming our way!

Yes, that is right! Originally known as Brandnewz will be debuting as a project group! The group is called BDC, which stands for Boys Da Capo. It consists of three members including Kim Sihun, Hong Seongjun and Yun Junghwan. They have begun teasing for their debut. So, check out the teasers below!

They have released the debut schedule. They will start with their concept teasers from October 18th to the 22nd. Following it is the cover artwork and tracklist on October 23rd and 24th. They will drop the MV teasers on October 25th and 28th. Finally, they will release the album preview on October 26th.

Kim Sihun is first up with his individual teasers. We get a total of three looks. Two of them are taken outside. The first image has him looking super soft and cute as he points to something. The second image has a more stern look from him as he stares down the camera. The final image has him enjoying his time leaning against the wall.

Hong Seongjun is up next with his image teasers. We have an image of him holding a vase of flowers that allows him to look so delicate. The other image is of his reflection through the circular mirror. The final image is a close up of him under the natural light.

Yun Junghwan looks great in his images. In one of the image, he is seen holding an instrument case as he wanders in the plain field. The second image has him posing with a beautiful light behind him. While the final image has him in such a cute pose!

The last concept is of their group teasers. They definitely look great with one another. One can’t help but get excited for what’s to come. They are a group that fans should look forward to!

Meanwhile, the group will be releasing a special album, ‘Boys Da Capo‘ on October 29th. What do you think of the concepts? Let us know in the comments below!

Tracey Luu
← Previous Story A.C.E is part of ‘The Mad Squad’ in latest teasers
Next Story → We In The Zone wants to have a ‘Loveade’ in MV teasers