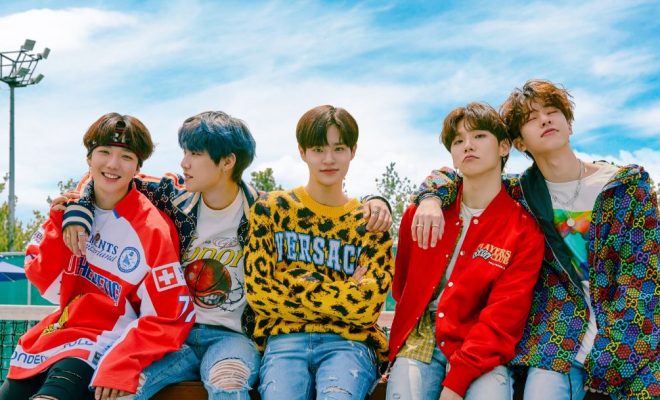 AB6IX goes for a ‘VIVID’ look in comeback teasers

Yes, that is right! AB6IX will be returning with ‘VIVID‘. They have revealed the comeback schedule, as well as the teasers. Check it out below!

The first concept is just so bright and colourful. It gives it that cheerful vibe that goes so well with them, as well as the current season. It is definitely a look we don’t see often from them.

The second concept is full of the colour blue. This gives them that charismatic look as they give us all kinds of cool and beautiful poses. It is interesting that they have decided to adopt the colour green for the group photo. However, it still incorporates elements of the sky into the image.

The next concept has that cool look. They are seen posing in front of a beautifully lit-up moon. Their outfits are also colour coordinated between grey and different shades of blue. It is quite a unique look, which they pull off seamlessly.

The final concept is another vivid image. However, it has this more refreshing look, especially since they are posing outside. The sunny weather helps enhance this look they are going for.

Next up are their individual concept trailers. Each member gets their own teaser which features them looking quite cool for the camera. The song is also quite bright and goes nicely with the vibe of the video. Youngmin is seen posing with the colour yellow, looking quite bright.

Woong looks incredible with shades of red. The song that is playing his video is much more chill and really have you grooving along to it. Finally, Woojin is seen with a deeper yellow colour. The song is also quite enchanting with this continuous synth sound playing before it ends with a beautiful sound. The final concept trailer features all the members. They are seen painting a letter each before it ends with Daehwi‘s beautiful vocals.

They have also released the tracklist. There is a total of six tracks including ‘Red Up‘, ‘Vivid‘, ‘The Answer‘, ‘Surreal‘, ‘Midnight Blue‘ and ‘Hold Tight‘.

Finally, the latest teaser is the MV teaser for ‘The Answer‘. In this video teaser, we see the members wearing such beautiful red suits while enjoying the overall view. Once again, we see a colourful set with all different shapes surrounding them. The song itself has such a fun vibe that one would definitely vibe along to. One can’t wait to hear more of it. So far, the vocals are just stunning to listen to.

Meanwhile, they are set to make their hot return on June 8th. Are you ready? Let us know in the comments below!