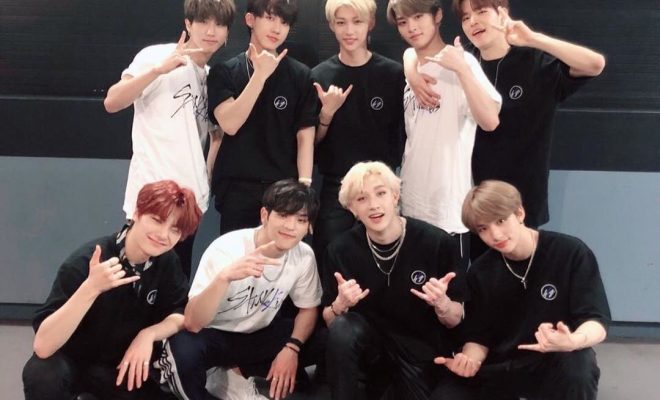 As many fans know, Stray Kids began their Australian ‘Unveil Tour‘ in Melbourne on February 21st. On that day, a lot of Melbourne Stays came together to witness the performances and enjoy the company of Stray Kids.

Melbourne Stays gave the warmest of welcomes to all the members of Stray Kids but especially to Bang Chan and Felix. The two members are Australian, and fans were all happy and excited to see them perform in their home country.

Every second with Stray Kids was a precious memory. So, All Access Asia has chosen 7 special moments that Stray Kids shared with Melbourne Stays on Thursday.

As many fans already know, Seungmin had suffered a slight back injury prior to the tour, and fans were worried about his condition. Despite all that, Seungmin fought hard to recover and was able to join the fans in Melbourne. Even though he wasn’t able to perform with the rest of the group, he did his best with showing fans the best side of himself.

Most of the time, he was on a chair at the side of the stage, however that didn’t stop him from smiling throughout the whole concert. It was evident that he was there with the fans the whole way through, enjoying it with us. There were many sweet moments in which Stray Kids never forgot Seungmin, and they always included him in everything they could.

There were also many sweet moments where the members carried Seungmin (and the chair) to take photos with the fans and for the finale song, ‘Grow Up‘. It was such a beautiful sight to see. It is obvious that they have a strong bond with one another. There was a part of Chan‘s speech in which he refers to his members as “Brothers” and “Family“. It was such a touching moment while watching Stray Kids pursue their dreams together.

The whole night was a perfect one, especially when they gave it their all. It was evident that they put everything they have into giving fans the best performance they could give. They were sweating so much, but they never wavered in their strong and fierce expressions. What they gave us on that Melbourne stage was just full of power, energy and passion; the star qualities that fans knew Stray Kids have.

It was just so much fun to watch them bring everything they could into the performances. Because of that, fans went crazy and screamed at the top of their lungs, showing their love and support for the group. With Stray Kids and Stays all together in one room, no one could cut that bond that they had that night.

What made their performances extra special for the fans is the staff behind the scenes; the ones who controlled the lighting, the VCR and the special effects of the stage. It was always such a surprise when the unexpected happens. The VCR that they had prepared surely captured everyone’s attention at the time, as well as the streamers and confetti surprise they added in. It made the whole experience that more touching and beautiful.

After many groups of performances, Stray Kids would stop and talk to the fans. There was one section that it was clear that they had spent a lot of time preparing for. It was none other than aegyo gestures from each member. Every member had their inner cuteness which fans loved. They knew the right things to do to pull fans closer. Every cute gesture that the members did, the fans responded accordingly with cheers and screams. It was a moment to live for and remember.

Every chance they got, they would give fans their own special fan service. They know how to pull on our heartstrings with their short waves, love heart gestures and cute dance moves. Also, a special mention to IN who was just adorable throughout the whole concert; he continued to shower fans with love!

What better way to welcome Bang Chan and Felix back home than with the Aussie Spirit. Fans knew the right things to do and the best way to have Stray Kids touched. Even before the show even begun, fans were chanting “Aussie Aussie Aussie; Oi Oi Oi“, hoping that they could hear it backstage.

During Changbin‘s opening speech, he began the “Aussie Aussie Aussie” chant, and Stays responded accordingly with “Oi Oi Oi“. The amount of energy and passion that fans put into that chant could be felt by everyone in the room. It was a moment that was just beautiful.

The chanting continued throughout the concert, but the final time we did it, Chan told us to do one more time! We gave them our loudest “Oi Oi Oi” scream! The energy during those moments were phenomenal to the point that Chan even talked about it during the V Live broadcast the group did after their show in Melbourne.

This tour is essentially in celebration of Stray Kids‘ ‘I Am..‘ trilogy. They made their debut last year and had two subsequent comebacks. It started with their ‘I Am NOT‘ debut album, followed by their ‘I Am WHO‘ and ‘I Am YOU‘.

For this concert, they chose to perform songs from each of the albums.

From their ‘I Am NOT‘ album, they performed ‘District 9′, ‘Mirror‘, ‘Awaken‘, ‘NOT!‘ and ‘Grow Up‘. In our opinion, the most special performance from this album would have to have been ‘Grow Up‘. It was the final song before they ended the concert, and Stray Kids and Stays came together to give their all to sing this song. It was a perfect way to end it.

From their ‘I Am WHO‘ album, they performed ‘My Pace‘, ‘WHO?‘, ‘Voices‘, ‘Insomnia‘ and ‘Awkward Silence‘. For this set of tracks, the performance that blew everyone’s mind was for ‘WHO?‘. Even though the track itself is short, the performance felt long and worthwhile. They gave us an intricate performance that left us speechless. The meaning they conveyed through this song and performance was beautiful.

Meanwhile, from their ‘I Am YOU‘ album, they performed ‘I Am You‘, ‘You‘, ‘My Side’ and ‘Get Cool‘. From this set of tracks, it would have to be the ‘Get Cool‘ performance that stood out. They were all happy while performing, moving around the stage while giving fans small fan service gestures. Fans were also singing along, especially rapping along to Chan and Felix‘s part; having fun with them. Fans were super loud during this song and it is evident that Stray Kids felt the love of their fans.

After fans’ loud chanting of “Encore“, a VCR came up and we could see the thought process that went into developing this concert. They talked about the kind of songs they wanted to include and the special event they wanted to prepare specifically for their fans.

They came up with the idea of doing unit performances of tracks that they would not normally perform at music shows. By doing that, it gave something special for fans to remember.

What also made these songs special is the fact that the tracks were from their pre-debut album, ‘Mixtape‘. The first unit to perform consisted of Chan, Seungmin and Hyunjin. They had performed the track, ‘4419‘.

The second track performed was called ‘Glow‘. It was performed beautifully by members Felix, Lee Know and Changbin. It was slow and just so special to listen to. They continued to show us how much they have grown since their pre-debut year.

The final unit track was ‘School Life‘. It was initially performed by members Woojin, Han and IN before the rest of the members came in and joined. They also performed the tracks ‘Grr‘ and ‘YAYAYA‘ from their pre-debut album.

Every good thing about a concert always come to an end when the group begins their final speeches before the end the concert. What was special about these final speeches was just how touched the members were when they talked to their fans.

Each of them were on the verge of tearing up but held it in to savour the happy moments. Their speeches showed just how emotional, how heart-felt they were about the very moment they were in. Their love for the fans was definitely felt through the speeches. Many of the members also took the opportunity to speak in English. It is obvious that they spoke from their heart and fans felt it through their words.

During the speeches, the most emotional part included Felix and Chan‘s speech. Most of the speeches made by the members was about Felix and Chan being able to come to Australia to perform in their home country. In particular, the two members talked about their journey from Australia to Korea and now back to Australia. Just listening to their story and the amount of hard work they have put into living their dreams was just incredible.

As a way to end all the speeches, they had prepared one last thing together. Altogether, they said “Stay, you make Stray Kids stay” and made their final bow.

Meanwhile, Stray Kids will be finishing off their Australia leg tour in Sydney on February 24th. We would like to extend our thanks to MyMusicTaste and JYP for making Stray Kids ‘Unveil Tour‘ happen in Australia. It was a beautiful concert to go to and Melbourne Stays are always happy to welcome them back. We would also like to thank all the fans who have posted the fancams that are used in this article.