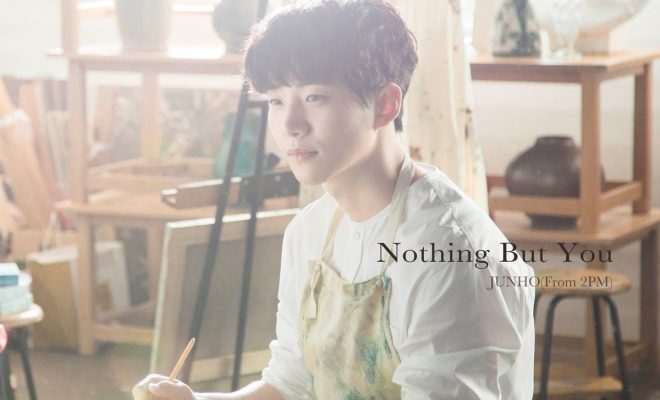 Sometimes watching 2PM‘s Junho acting abilities, we forget just how great of a singer he is. Well, it looks like he won’t only be acting but also be singing an OST for his first Japanese movie, ‘Roses and Tulips‘. He has dropped the first teaser. So, check it out below!

So, in this image teaser, it gives us the title of the OST track, as well as the overall atmosphere of the movie. He is seen posing as a painter, which is the character he is playing in the movie. In particular, he will be a Korean student studying in Japan, as well as a world-famous modern artist. It appears that the two characters exchanges their daily lives, discovering who they truly are. It definitely is an interesting concept and one can’t wait to hear the OST track that goes along with it.

Meanwhile, ‘Nothing But You‘ OST track will be dropped on April 26th. Are you excited? Let us know in the comments below!

Tracey Luu
← Previous Story High School gives you a preview of ‘Baby You’re Mine’ track
Next Story → NewKidd gives you a look at their upcoming track, ‘Tu Eres’