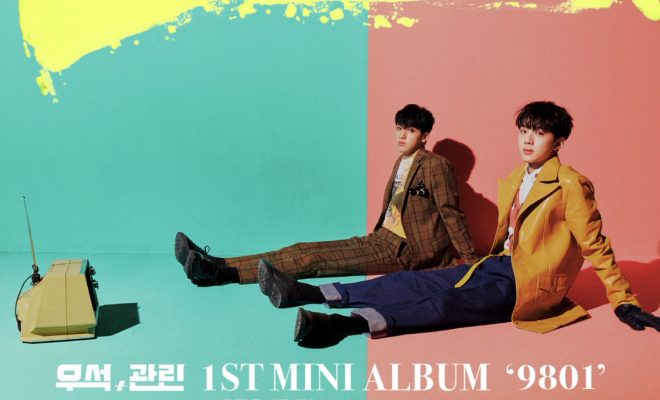 Wooseok x Kuanlin has revealed the highlight medley for their ‘9801‘ album. They have also dropped a special Star-Ting teaser. So, check it out below!

With the Star-Ting teaser, each member gets their own video teaser. In Wooseok’s teaser, it highlights his best qualities and charms. The track that accompanies the video is really upbeat and surely lives up to the standard of the video. We get to see Wooseok‘s fun and cool side!

For Kuanlin‘s Star-Ting teaser, we get to hear another part of the groovy song filled with brass. Kuanlin looks like he had lots of fun filming this video. He appears to move side to side, while showing fans his best sides. We also get to see his serious side as well when he is seen taking his individual image teasers.

This album has a total of five tracks including the title track, ‘Star‘, ‘Hypey‘ featuring GOT7‘s Jackson Wang, ‘Always Difficult, Always Beautiful‘, ‘Good Feeling‘ and ‘Domino‘. The title track has this groovy melody to it which surely has you moving side to side with it. With all rappers on one track, we surely expect all kind of rap sections. It is definitely a hype song!

‘Always Difficult, Always Beautiful‘ is a song that is able to show their singing ability. It has this touching side that really have you sympathizing to the lyrics. ‘Good Feeling‘ is the kind of song that has a sick flow and one can’t help but get addicted to the way it sounds. ‘Domino‘ is a great way to finish off the album since it is soothing and surely draws in the good vibes.

Meanwhile, they will make their hot unit debut on March 11th. Which track did you like more? Let us know in the comments below!