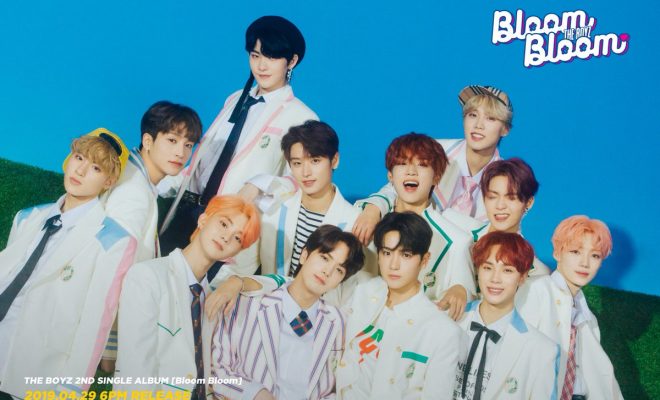 The Boyz are blooming in teasers for ‘Bloom Bloom’

The Boyz will be making a Spring comeback with their second single album ‘Bloom Bloom‘.

‘Bloom Bloom‘ is scheduled for release on April 29.

The highlight medley gives us a chance to hear a portion of each of the three songs on the single album. All the songs show off the sweet and gentle vocals and the amazing harmonies that they possess with each other.

Members Sunwoo and Eric contributed lyrics for their title track ‘Bloom Bloom‘, and Eric also co-wrote the lyrics for ‘Butterfly‘. The lyrics for ‘Clover‘ were co-written by The Boyz.

The concept images that have been released feature the members all looking bright and casual. There are quite a few perfect ‘boyfriend’ looks going on – way too many for us to pick just one!

The overall feel for the images is colourful and perfect for spring and as we’ve seen in other concepts, it’s focused around flowers that are perfectly in bloom right now.

The Boyz second single album ‘Bloom Bloom’ is scheduled for release on April 29 at 6pm KST.

Are you looking forward to new music from The Boyz? What do you think of the concept for ‘Bloom Bloom‘? Let us know your thoughts in the comments below.