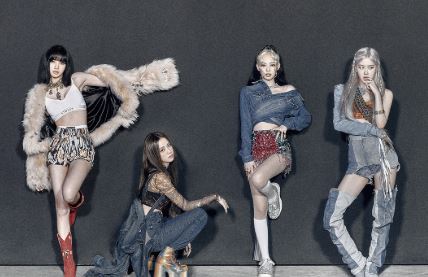 BLACKPINK prepares for their upcoming return with ‘The Album‘. So, check out the teases below!

They have released the coming soon teaser which has the members’ back facing the camera. They definitely already look quite charismatic as they walk on the curves of a levelled car park.

Jisoo is up first with her concept teasers. The first image teaser showcases her wearing a denim outfit while looking so beautiful. This kind of concept allows her to showcase her beauty and charms. The second image teaser has her showcasing her more fierce side as she stares down at the camera. It is definitely a look that can kill!

Jennie is next with her concept teasers. Her bright image has her going for an intense look as she looks straight at the camera. She knows how to look fierce without even trying. It is definitely a look that goes well with her. Her second image teaser has her toning it down and going for a more heartbreaking look. The overall concept fits her so nicely as she has her hair tied up so neatly.

Lisa is the third member to drop her concept teasers. Both of her image teasers allow her to showcase her fierce side. She has a way of staring down the camera so calmly yet so fiercely at the same time. Both look really resonate well with her as she allows her visuals and props do the talking.

Rose is the final member to drop her image teaser. She has revealed the first poster. She is sporting beautiful white hair with touches of purple. It is quite a look as she pierces the camera with her eyes. She looks so charismatic with the chains. One can’t wait to see the second poster teaser.

Meanwhile, the group will make their hot return on October 2nd. Are you ready? Let us know in the comments below!