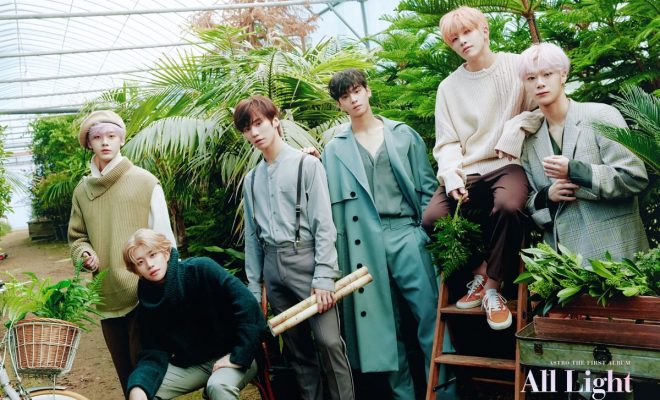 ASTRO are romantic leading men in concept teasers for ‘All Light’

Since ASTRO announced their comeback with their first full album to be titled ‘All Light’,they have continued to drop seriously stunning teasers.

Each clip is highly visual, which is what you would expect from ASTRO, but they all have a different feel, playing to the individual strengths of the members.

Moonbin is the latest member to have his concept film released. In the 28-second clip, Moonbin will captivate fans with his strong visuals while being lost in thought and wandering through a beautiful garden.

MJ’s clip sees him in a beautiful garden surrounded by beautiful blooms and ripe fruit before he smiles brightly into the camera, making our hearts skip a beat.

In his clip Rocky looks to be concocting a beautiful perfume using the stunning blooms he is surrounded by.

Cha Eun Woo‘s clip is, as you would expect – stunning. He is mesmerising as he wanders through the garden. Towards the end of the clip he says something that is inaudible – we need to know what he said!

ASTRO‘s leader Jinjin is perched amongst the branches of a tree, soaking up the surroundings. His look for this concept – his bright pink hair – makes a beautiful contrast to his surrounds.

Maknae Sanha with his purple hair and green eyes makes an immediate impact in his concept film. He looks somewhat lost in thought surrounded by lost blossoms and crystals, and a goldfish swimming in a goldfish bowl.

Are you looking forward to ASTRO‘s comeback? What do you think of the concept films? Let us know your thoughts in the comments below.

asiaadmin
← Previous Story Dreamcatcher looks ‘Over The Sky’ in latest teaser
Next Story → WayV is ready to launch!